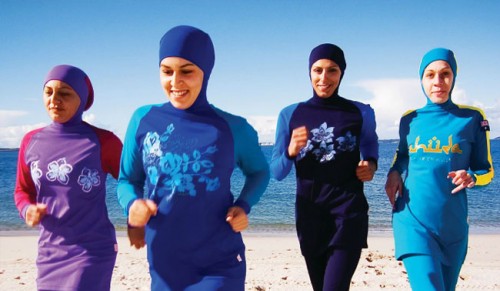 Sydney-based Ahiida has opened up a whole new range of swim and sportswear garment choices for women who might otherwise opt out of swimming activities due to a lack of fashionable swimwear on offer that aligns with their religious and cultural beliefs.

Ahiida's 'burqini' swimsuit was born when Managing Director Aheda Zanetti came up with a swimsuit design for women that covers the whole body except the face, hands and the feet (enough to preserve Muslim modesty), while being light enough to enable swimming. The result offers a perfect solution for Muslim women wanting to swim but have felt uncomfortable about more 'revealing' bathing suits.

Lebanese-Australian Zanetti explains that the burqini "looks rather like a full-length wetsuit with built-in hood, but is somewhat looser and made of swimsuit material instead of rubber."

The burqini is made from breathable, moisture controlled fabric that allows freedom of movement and flexibility.

The burqini is now seen on Australian beaches, and, most notably has been used as a uniform for Muslim women surf livesavers from Sydney's Lakemba Sports club, but its biggest success has been in Muslim countries through Asia, the Middle East and North Africa wear the garments are sold extensively in waterparks and resorts.

In developing her overseas sales, Zanetti acknowledges the help of Austrade and has extended the market for the burqini. As she explains, "the burqini can extend to women who are especially sun sensitive and seek more cover while participating in summer sports and acitvities.

"For those who want to cover up and avoid skin cancers the Burqini is a fashionable and comfortable way to cover up while being made of materials that are perfect for swimming.

"It's also an option for women who don't want to show as much skin - or are self conscious about their figures."

Ahiida's success in new markets has led to a variety of sales.

Zanetti adds "we have enquiries coming for all women no matter their religion, colour, size or shape and we have many non-Muslim women asking about the Burqini swimsuits- Jewish women, Catholic women, and there are also men asking when a male range is coming out!"

The popularity of the burqini at waterparks in the Arabian Gulf is featured in the article 'Waves and Wadis' in the September/October 2009 issue of Australasian Leisure Management.

To find out more about Ahiida Pty Ltd's range of swim and sportswear contact Aheda Zanetti on 02 9750 0641, E: aheda@ahiida.com, www.ahiida.com