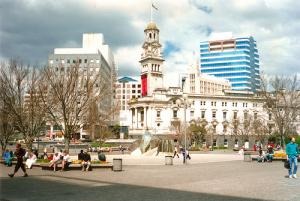 After two years of construction activity, Auckland's Aotea Square has reopened to the public.

One of the city's largest capital projects over the past two years, Aotea Square takes its place as the city's premier open space.

The $80 million redevelopment project includes the Aotea Square landscape upgrade, the Civic car park roof replacement and upgrade, as well as improvements to the facade of Aotea Centre.

Councillor Greg Moyle, Chairperson for the Arts, Recreation and Culture committee is proud of the completed project, stating "we now have a modern and high quality public space for all Aucklanders. The square now provides a safe, family-friendly environment for residents and visitors to enjoy major public events or everyday activities."

With trees, new paving, seating, grassed terraces and ambient lighting, Aotea Square will be a great venue for people to connect, celebrate, and enjoy the best of Auckland's arts and entertainment, day or night.

Aotea Square was officially opened by Sir Dove-Myer Robinson in 1979, three years after the Civic underground car park was built.

An upgrade of the square was planned from 2000, but was put on hold following the discovery of damage to the Civic car park roof in 2004.

Priority shifted to repairing the Civic car park roof beneath the square to make it structurally sound. This provided the council with an ideal opportunity to combine the repair of the Civic Car Park roof and upgrade the square.

The new roof of the Civic car park was built using innovative construction techniques. The entire roof was constructed while the car park remained opened. This was done using carbon fibre to reinforce existing concrete beams, a technique widely used in the mining industry and is a relatively new methodology in New Zealand.

Above ground, the front entrance of the Aotea Centre got a facelift with new entrance stairs and a new glass and aluminium canopy inset with small lights giving the effect of a starry sky.

Work is also progressing rapidly on an integrated café, bar and box office at the Aotea Centre. THE EDGE will be announcing the opening date soon.

Councillor Moyle added "construction activity in and around the square will continue after the opening. This is due to additional work identified during the project, which is to be undertaken in the near future."

• Paving between the Civic administration building and Aotea Centre
• Remedial works and paving outside Q-Theatre
• Installing another new lift within the Metro Centre, that provides access into the Civic car park.

The Aotea Square redevelopment project is part of the council's Aotea Quarter plan to enhance the lively arts, culture and entertainment hub with a distinctly Auckland feel.

For more information go to www.aucklandcity.govt.nz/aotea