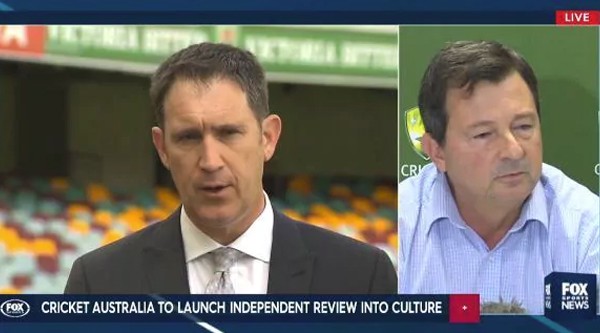 Cricket Australia Chairman David Peever has advised that Chief Executive James Sutherland’s position is not under threat despite the announcement of a comprenhesive review into the organisation’s culture.

The independent review will run in tandem with another player-driven process - headed by former Test opener Rick McCosker - to draw up a ‘charter’ for standards of behaviour and expectations of Australian men’s cricket teams.

It comes as the governing body attempts to move on from the ball-tampering scandal from last month’s Cape Town Test, which has seen skipper Steve Smith, vice-captain David Warner and Cameron Bancroft issued with lengthy suspensions and the sport itself thrown into crisis.

However, it appears Sutherland is safe regardless of the outcomes of the review, with Peever declaring he had the “full support” of the Cricket Australia board. There is no indication as to who will lead the review or how long it will take, but Peever said it would not descend into a “witch-hunt.”

Peever announced today “I think we’re all going to come under the microscope in terms of what is occurring back in the organisation that might have contributed to this.

“But I can tell you this, circumstances like this are not the time for witch-hunts.

“I know people in these circumstances call for everybody to be sacked. Clearly, that isn’t going to solve any problems. What we must do now is work on the issues that we have and we take responsibility for fixing them and making them better.”

Peever, who also claimed he had no intention to step down as Chairman, said Sutherland had done an “outstanding” job handling the Cape Town crisis.

He added “I know that when the time comes for James to make a decision about what he wants to do in regards to his role in Cricket Australia, he will be remembered as one of the best servants of cricket in this country.”

McCosker, meanwhile, is expected to be joined on a panel for the player-driven review by two ex-players and two current players.

Peever said that process would help form reference points for the independent review, which will establish if there are links between the “culture, processes and governance” of Cricket Australia and recent events in South Africa.