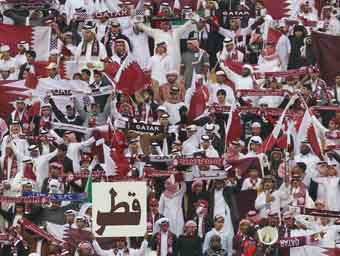 Kuwait may have scored the first goal against Australia in the opening match of the Asian Football Confederation (AFC) Asian Cup but when the match ended 4-1 in favour of the hosts the message was not simply a defeat on the pitch.

James M. Dorsey explains that with 10 of the 16 finalists in the 2015 Asian Cup hailing from the Middle East, the tournament highlights the impact of Middle Eastern politics on the game.

In a world in which diplomacy has expanded from government-to-government contacts into public and cultural diplomacy and in which nations are ranked as much on their performance in high-profile international tournaments as on other attributes, autocratic abuse of sports and its impact on football, including performance, is nowhere more prevalent than in the Middle East and North Africa.

Politics plays on the background each time a national squad enters the pitch.

The politics range from long-standing, heavy-handed interference in national football affairs as in the cases of Kuwait, Saudi Arabia, and Iran, or national teams like Palestine who see their performance as key to the projection of nation- and statehood and the political aspiration of their managers, to efforts to shore up tarnished images that are important for regimes such as those of Saudi Arabia, Qatar, Iran and Bahrain.

Kuwait’s national team was schlepping significant political baggage when it entered the pitch for the Asian Cup’s opening match. Kuwait has failed to win an Asian Cup for the last 35 years. The team’s coach, Jorvan Vieira, an Arabic-speaking Brazilian-Moroccan national and convert to Islam of Portuguese descent, who led Iraq to winning the tournament in 2007 at the height of sectarian violence that was tearing the country apart, was fired barely six weeks before the kick-off in Australia.

Viera was blamed for Kuwait’s poor performance in the Gulf Cup in November, becoming the latest casualty of a Middle Eastern approach towards football as a zero sum game that is in part rooted in the fact that members of autocratic ruling elites across the region see performance on the pitch as an opportunity to polish often tarnished images and barometers of the standing of their nation and themselves. He joined a long list of coaches who became casualties of political whims.

The Gulf Cup brought the axe down on his immediate predecessors on the list. Bahrain’s Anthony Hudson was dismissed barely three months after he had been hired for his team’s poor Gulf Cup performance. Football performance is important to Bahrain’s ruling minority Sunni Muslim family that almost four years after brutally crushing a popular uprising confronts ongoing protests and has been unable to shake the image of a repressive regime unwilling to seek genuine political compromise with its majority Shiite Muslim population.

Similarly, Iraq fired Hakeem Shaker after his team ended last of its group in the Gulf Cup. Iraq desperately wants a repeat of its 2007 triumphant performance. Its winning then of the Asian Cup was feted as a triumph of a team composed of members of its warring Sunni, Shiite and Kurdish communities against the odds at a time much like now that Iraq’s territorial integrity and future as a nation state is in question.

Saudi Arabia has changed coaches more than 20 times in the past two decades. One of its longest lasting coaches, Juan Lopez Caro, was also let go in November after Saudi Arabia failed to defeat its political nemesis, Qatar, in the Gulf Cup final. Football as a tool to project modernity is important for Saudi Arabia at a time that it’s puritan Wahhabi interpretation of Islam is under fire as a feeding ground for more militant jihadist philosophies like that of the Islamic State, the jihadist group that controls a swath of Syria and Iraq.

For Qatar, fresh from winning the Gulf Cup, football performance is not simply an integral part of its soft power strategy. Its controversial winning of the right to host the 2022 FIFA World Cup that has been mired in controversy over the integrity of its bid and the working and living conditions of its majority migrant labour population needs performance to counter allegations that it has no football legacy nor a real football future. The very fact that its squad in Australia is in majority made up of Qatari nationals is key to that effort.

Similarly, Iran, an Islamic republic accused of involvement in terrorism and building a nuclear weapon and a dark horse in the Asian Cup, hopes to repeat its success in the World Cup in Brazil six months ago. Despite narrowly losing a match against World Cup favourite Argentina, Iran emerged in the Estado Mineirao in Belo Horizonte as the spectator’s darling, a badly needed image boost for a nation long seen as one of the world’s pariahs.  “We know the world will be watching. That gives us motivation. A good game is important, not whether we win or lose,” Islamic Republic of Iran Football Federation president Ali Kafashian told The Daily Telegraph at the time.

The same is true for Palestine. Its team is playing as much for success on the pitch as it is for progression of its national ambitions on the international stage. Projection of statehood is key against the backdrop of failed peace negotiations with Israel, the United Nations Security Council’s recent rejection of a resolution that would have set a deadline for the end of Israeli occupation, the Palestine Authority’s effort to project statehood by joining a host of United Nations organisations including the International Criminal Court, and a campaign by the Palestine Football Association (PFA) to get Israel suspended by world football body FIFA for obstructing development of the Palestinian game.

Palestine has in part already achieved that goal by qualifying for the first time for the Asian Cup finals. A good performance would be icing on the cake. That is also true for PFA president Jibril Rajoub, a former senior Palestinian security officials who spent 17 years in Israeli jail, and is believed to have presidential ambitions in future elections.

The politics of Asian football were evident even before Kuwait’s kick-off in the Asian Cup’s first match. Asian football federation bosses with in the lead Sheikh Ahmad Al-Fahad Al-Sabah, one of the most powerful men in world sports, endorsed Sepp Blatter for a fifth term as world football body FIFA president the candidacy of Sepp Blatter. Mr. Blatter used his past four terms to effectively support Arab autocracy.

Sheikh Ahmed, a mover and shaker in Asian football even though he has no official position in the Asian Football Confederation (AFC) or FIFA, advised FIFA vice president Prince Ali Bin Al Hussein of Jordan, the foremost proponent of reform of world football’s sordid governance, to rethink his newly declared challenge to Mr. Blatter. He was echoed in this by AFC president Bahraini Shaikh Salman bin Ebrahim Al Khalifa, a member of Bahrain’s ruling family.

Using the word ‘we’ despite the fact that he holds Olympic rather than football offices, Sheikh Ahmed, referring to the AFC Congress in Sao Paulo in June, declared: “We decided in the general assembly to vote for Blatter, so I think now Prince Ali has to consider that and he has to think about this matter a lot."

5th January 2015 - PALESTINE’S PRESENCE IN THE AFC ASIAN CUP A STEP TOWARDS STATEHOOD?