Art Gallery of NSW’s expansion to suffer from lack of funds? 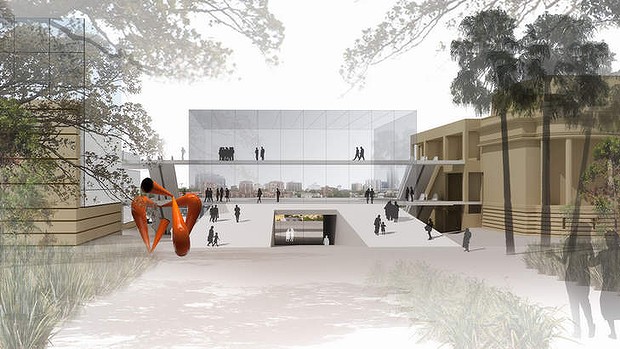 Sydney's Art Gallery of New South Wales has revealed plans to double in size and transform itself into an art museum for the 'Asian century'.

Aiming to expand northwards toward Mrs Maquaries Chair, the expansion aims to also include gallery space for new acquisitions, technology to engage global audiences, initiatives to cater to non-English speakers along with better transport connections and dining facilities.

Under the working title of 'Sydney Modern', the $400 million plan is predicted to attract 800,000 extra visitors a year. The development would allow more blockbuster exhibitions and provide much-needed extra space at the gallery, which is less than half the size of the National Gallery of Victoria.

Plans for the expansion, which aims to be completed for the 150th anniversary of the Gallery's founding in 2021, will be subject to an international architectural competition. The plans call for a spectacular grand entrance to link the existing heritage building with the new building.

Explaining that Sydney risked being left behind by major new gallery projects now underway in Singapore, Hong Kong and San Francisco, Gallery President Steven Lowy stated "we have the opportunity to create an iconic building that will take its place alongside the Sydney Opera House and the Harbour Bridge as an international beacon of modernity, creativity and the celebration of the human spirit."

While the Gallery is now consulting with stakeholders, including the NSW Government, the Royal Botanic Gardens, transport authorities, the artistic community and its friends and supporters, doubts have arisen over the funding of the plan.

According to a report from PricewaterhouseCoopers, underfunding of the cultural sector in NSW threatens many of the State's grand art visions, including the Gallery expansion and an upgrade of the Sydney Opera House.

The report, prepared for Infrastructure NSW in June last year, warned that the capital required for these and other proposals, plus maintenance, far exceeded funding forecasts. The NSW Government is also assessing a proposed $1.1 billion upgrade of the Sydney Opera House and has plans to turn Walsh Bay into a main arts precinct.

Lack of exhibition space has seen NSW fall behind other states in attracting lucrative shows, hosting just two of the top 10 attended exhibitions in Australia since 2007.

The consultant's report, which informed the NSW's 20-year infrastructure plan, said venues would have to find other sources of funds such as higher revenue and federal funding.

It cited warnings by the Opera House that without significant "intervention" it would probably need to "repurpose" venues, such as using the opera theatre as a drama or recital hall.

A spokesman for NSW Arts Minister George Souris welcomed the Gallery's plans but said the government could not guarantee funding.

The spokesperson added "the next stage is to conduct the appropriate feasibility studies and then possibly progress to initial design."