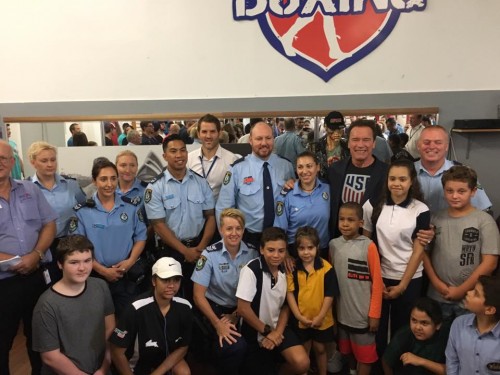 Visiting the country for last weekend's Arnold Classic in Melbourne, the former Governor of California today visited the South Sydney PCYC to meet with his friend of 50 years, International Federation of Bodybuilding and Fitness (IFBB) Vice President for Oceania Paul Graham and his wife Carole, along with PCYC members and staff.

Schwarzenegger, who is in Sydney for the Total Success summit, and Graham, presented a cheque for $5,000 to the club to help with new equipment and the upkeep of the facility.

Speaking to media, the Pumping Iron star commented “this is really great what you’re doing here to give them sports and a place they can enjoy themselves because we need to teach kids to say ‘no’ to drugs ‘no’ to gangs ‘no’ to violence and ‘yes’ to sports, ‘yes’ to education and ‘yes’ to life.” Schwarzenegger added “I’m very passionate about after-school programs.”

Commenting on his After School All Stars program Schwarzenegger stated “I have created a foundation and organisation in America and we are the number one experts in after school programs in America. So I am a fanatic about this.”

The Hollywood star posed for photographs with members and fans and signed autographs during his visit.

For more information on the After School All Stars program go to www.afterschoolallstars.org