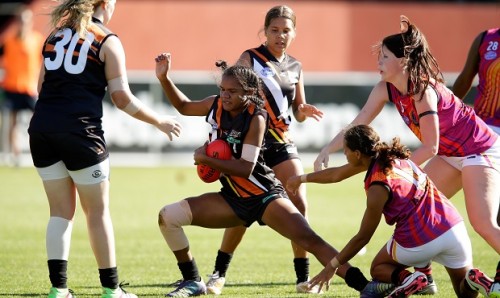 AFL Victoria has announced the establishment of a new female development program that will pave the way for Indigenous women to engage in all forms of Australian Football.

In partnership with VicHealth and the Richmond Football Club, AFL Victoria’s Boorimul Program has been designed to identify and nurture talented Indigenous female players into the elite AFL pathway.

Drawing on similarities from the highly-successful Laguntas program for males, the Boorimul Program will support talented young female Indigenous athletes aged 16 to 20 years, to not only maximise their football potential, but develop them as culturally affirmed and resilient community members.

In addition to enhancing on-field talent, the new program will also provide opportunities for Indigenous females to engage with Australian Football through umpiring, coaching and administrative work in the AFL.

AFL Victoria Indigenous Programs Manager Aaron Davey said the program would be a key factor in increasing the diversity in the game, stating “in partnership with VicHealth and the Richmond Football Club, AFL Victoria is excited to develop the Boorimul program which will use football as a vehicle to help increase participation opportunities for young Indigenous women.

“As of 2017, only 5% of the total playing pool in the AFLW league is of Indigenous background, so we hope that through the introduction of the Boorimul program we can see that number become even greater in the near future.”

Gale explains “as a provisional licence holder in AFLW, we have made a commitment to driving participation outcomes and we are well placed to deliver this program having previously established the highly-successful Laguntas program, in partnership with AFL Victoria and VicHealth.

“This announcement comes off the back of the alignment the Club recently established with the Bendigo Thunder women’s team, a partnership that also aims to promote participation and develop top-end talent.”