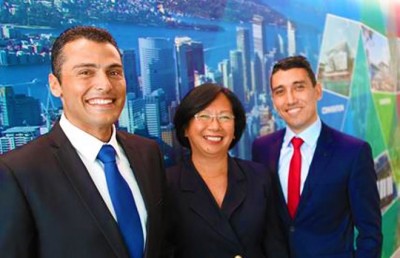 AEG Ogden has announced the appointment of three new directors to the International Convention Centre Sydney (ICC Sydney), completing the team that will manage daily operations at the convention, exhibition and event precinct in the lead up to the December 2016 launch.

Barrios has spent over 20 years in senior roles in the events industry; developing and implementing venue management strategies across a variety of venues throughout Australia.

Prior to Darwin, Barrios she was General Manager of The Sydney Showground.

Naofal has over 20 years’ experience in the service sector and is currently the Facilities Manager at Sydney Exhibition Centre @ Glebe Island.

Barrios and Naofal will continue their management of SEC@GI and support of the exhibition industry at the interim facility and will be responsible for the seamless transition of the industry’s events to ICC Sydney in December 2016 when the venue will officially launch and will play key roles in the test events that will commission the building from September 2016.

ICC Sydney Chief Executive and AEG Ogden Group Director for Convention Centres, Geoff Donaghy welcomed the appointments, stating “I am incredibly proud of our expanding team, each new ICC Sydney team member brings a wealth of experience that will no doubt have an immensely positive impact on the successful management and operation of the venue.

"At ICC Sydney, it is the calibre of expertise, knowledge and innovative thinking that enables us to deliver world class experiences and best in class events and exhibitions."

ICC Sydney is the centrepiece of the $3.4 billion transformation of Sydney's Darling Harbour.