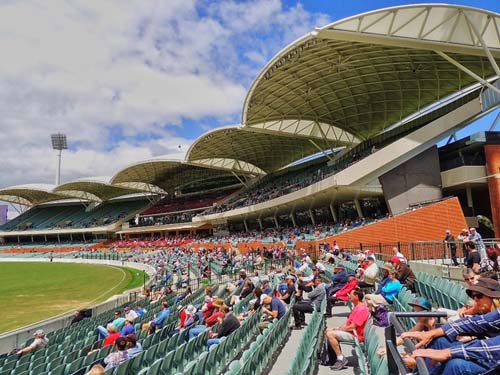 Adelaide's two AFL clubs and the South Australian National Football League (SANFL) will meet next month to revisit the distribution of revenues at the redeveloped Adelaide Oval.

The afl.com.au website reports that claims of poor earnings by the Adelaide Crows and Port Adelaide Power at home games at the redeveloped venue have soured record attendances since it opened with a sellout Showdown in round two.

Crows Chief Executive Steven Trigg and his Power counterpart Keith Thomas told the afl.com.au that the division of stadium revenue was a work in progress as both clubs and the Stadium Management Authority gathered data as to how successful Adelaide Oval was.

Trigg said the July review, which will be chaired by new AFL Chief Executive Gillon McLachlan, would provide all parties an opportunity to "take stock", adding "we'll see how things have been operating, and it's a chance for us to take stock because probably there's been too much said publicly about it.

"There's a bit of a grizzle that gets aired and all of a sudden it's a major issue – it's a significant enough of an issue that we've agreed to meet … but this is a fantastic outcome for everybody – don't lose sight of that.

"Stadium yields take in costs and revenue distribution, we're on record as saying we all know (the costs) started relatively high … collaboratively, bit by bit we're working to get those down.

"We'll just let the review take its course and towards the end of that we'll be able to say more with a bit more detail."

Thomas echoed Trigg's sentiment, but didn't rule out lobbying for a greater share of stadium revenue on the back of record crowds in 2014.

Thomas insisted the club was overjoyed with the performance of Adelaide Oval, claiming the review would allow all parties to see exactly how the stadium was functioning from a cost perspective and then perhaps reevaluate any revenue distribution.

He added "the first thing is to understand exactly what's going on from a cost point of view, where are the costs being spent, what didn't we see, what did we see? From a revenue point of view (we'll) get great clarity.

"We're starting that conversation from a fantastic position; the position is that the stadium and the clubs are over-performing our expectations.

"It's not unrealistic to, as you're spending years modeling a brand-new facility, to not know everything – that's exactly why the review's in place.

"We'll go into it with a better set of indicators and knowledge and we'll get it sorted out."

The #everyoneiswelcome campaign is a reminder to spectators more than a response to a particular incident, with all parties stating any behaviour deemed unacceptable around young children was unacceptable at Adelaide Oval.

Thomas said the stadium's 1-in-10,000-person eviction rate was among the lowest in the AFL, but that any Power member evicted could expect further punishment from the club.