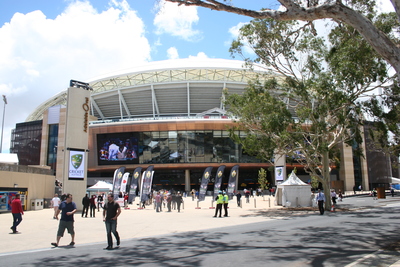 A series of additional security measures have been introduced at the Adelaide Oval – implemented for the first time at last night’s KFC Big Bash fixture between Adelaide Strikers and Brisbane Heat at the venue.

With the National Terrorism Threat Level remaining at the ‘Probable’ level, a recent security review by the South Australia Police led to a number of recommendations to improve security at the Adelaide Oval.

Temporary measures have been put in place during the cricket season, with more permanent measures to be installed before the start of 2017 AFL season. These include concrete barriers, normally used at the Adelaide 500 car race, being strategically around the Oval's southern and eastern entrances.

In advance of the AFL season, the South Australian Government will pay about $1 million towards the permanent measures which will include retractable bollards, concrete seating and planted boxes.

While SAPOL advises there is currently no localised threat to Adelaide Oval, the level of security to be applied will provide further comfort for patrons.

“Ensuring that the permanent security measures are integrated seamlessly into the environment will be a priority, it is important that the surroundings around the Adelaide Oval remain open and inclusive.

“We want people to be able to enjoy events and the surrounds at this iconic stadium with peace-of-mind and we will deliver these security enhancements to the highest possible standard.

South Australian Police Minister Peter Malinauskas added “at this time, it is important that we introduce these strategies to minimise risk wherever possible.

“The State Government is continually assessing its security arrangements and we have taken the opportunity to add an extra layer of security and comfort for patrons.

“There is no need for South Australians to be alarmed by these precautionary measures as there is no localised threat to Adelaide Oval.”

Adelaide Oval Stadium Management Authority Chief Executive Andrew Daniels welcomed the results of the review, concluding “we have very close working relationships with all local and national security authorities, and we are able to respond quickly where needed to changing circumstances.

“We never take any chances with the safety of patrons, and today is another example of that commitment.

“Having said that, when we need to make changes we will always try to do so in a way that impacts as little as possible on the event experience of patrons at Adelaide Oval.”