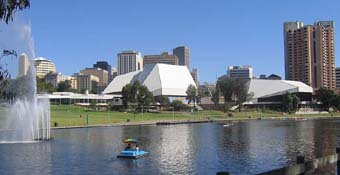 The management of Adelaide's Festival Centre has presented its vision for integrating the arts precinct into the Torrens riverbank to the South Australian Government.

Gautier likened the proposed concept, by architects Hassell, to Melbourne's popular Federation Square and the riverbank precincts of Brisbane and Hong Kong.

Gautier's presentation envisioned the proposed new footbridge across the River Torrens to lie between the two shells of the Festival Theatre and the Dunstan Playhouse, with an arm branching off towards the Adelaide Casino.

Gautier also said the Festival Centre concept would still work if it was decided to position the footbridge to the west of the playhouse with ramps extending from either side of the bridge.

The core of the concept surrounds a new-look plaza, which would include a new media gallery, a children's play area, a big screen for major events similar to the one at Federation Square in Melbourne, and a cinema/theatre.

Gautier told Adelaide Now "I think we have a once-in-a-lifetime opportunity here."

Minister Conlon, who is yet to commit to either of the two options for the footbridge, spoke highly of the plans for the public space at Friday's lunch, stating "this precinct will underpin the vibrancy of the city. We can cringe and be cautious but I believe Adelaide is a big enough city to deserve a world-class (sports) stadium and a world-class arts precinct.

"This is about believing we can be as good as we can be."