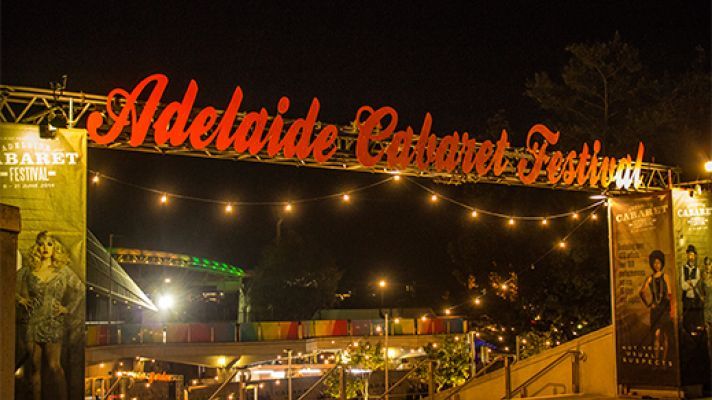 The Festival, now in its 17th year, is the largest cabaret festival in the world and attracts around 60,000 people annually.

Established 16 years ago, to continue South Australia's ‘festival state’ reputation in winter, the Festival was created at a time of decline in theatre jobs for working actors and singers, and with stand-up comedy taking over the city's festival scene.

After research indicated people were interested in having food and beverage experiences around performances and being able to see more than one show in a night in a more relaxed setting, Adelaide Cabaret Festival was born.

Adelaide Cabaret Festival is now Adelaide's major winter festival, activating Adelaide Riverbank each June. The 16 day and night extravaganza is a major event in the international and Australian arts calendar and has a reputation for highlighting the best local, national and International Artists through an eclectic program of classic and contemporary cabaret performances.

The 2016 Adelaide Cabaret Festival, under the custodianship of Co-Artistic Directors Ali McGregor and Eddie Perfect, celebrated the diversity of cabaret and was a resounding success.

SA Tourism Awards judges celebrated Adelaide Festival Centre and Adelaide Cabaret Festival's commitment to customer service and the patron experience, writing, "It is clear that customer service is at the forefront of everything you do.

“You clearly live and breathe your vision and mission statements, and ensure that your visitors receive the best possible experience."

Adelaide Festival Centre Chief Executive and Artistic Director, Douglas Gautier explains “we are delighted that Adelaide Cabaret Festival has been recognised by the South Australian Tourism Industry Council as a significant player amongst major events in SA.

“Winning the 2016 SA Tourism Awards Major Events and Festivals category is a great honour for us, especially when you consider the outstanding calibre of the festivals and events in South Australia.

"Thanks to our wonderful audiences and loyal sponsors for their support of the Festival. We have big plans for its future and look forward to announcing the 2017 Festival program next year. Our programming teams are currently working hard alongside Artistic Directors Ali McGregor and Eddie Perfect to create a festival that will again wow audiences, conjuring up a magnificent mix of world premieres, creative collaborations, and sparkling new works from Australia and all over the globe."