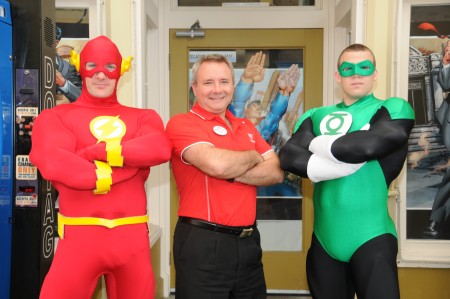 The management board of the Australian Amusement Leisure & Recreation Association Inc (AALARA) has elected Tony Lines as its new President effective today (Wednesday 11th May 2011).

Lines has been a member of AALARA since 1995 and prior to his election as President, has held the position of Chair of the Conference and Education and Training Committees.

Lines is the Human Resources Manager for the Movie World Business Unit of Village Roadshow Theme Parks and has worked in the entertainment industry for 18 years.

AALARA Executive Director Kim Hackwood explains "Tony has been an industry leader and dedicated to AALARA for many years.

"Tony is well regarded in the industry for his knowledge on issues and opportunities that affect every level of theme park and attractions industry in Australia. The AALARA board and myself look forward to working with Tony over the next two years. We know he will play an important role to moving the association forward.

Lines said that he was honoured to be appointed as the new President, adding "I have been involved with AALARA since 1995 and I am looking forward to working even more closely with this respected industry body to ensure the success of the amusement, leisure and recreation industry with in Australia."

Over his 18 career in the entertainment industry Lines has been involved with the Educational Committee of The International Association of Amusement Parks and Attractions (IAAPA), conducting training sessions in America and Asia. He has also won numerous training awards at state, national and international levels.

Lines career highlights at Village Roadshow Theme Parks including holding the position of Show and Entertainment Group Manager for three years as well as assisting with the grand opening of Australian Outback Spectacular.