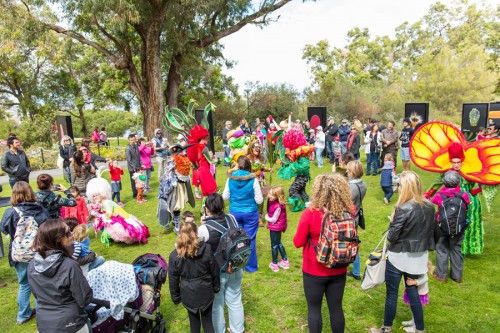 The festival will showcase the Park's many spectacular trees from the giant Kimberley boab Gija Jumulu, to the rows of lemon-scented gum trees along Fraser Avenue.

In launching the festival, Minister Marmion recognised the significant role the park's trees have played in shaping Western Australia's culture and history.

Minister Marmion explained that "Kings Park has so many magnificent trees, many of which have been important to the Nyoongar people for thousands of years

"A highlight of this year's festival is the new Boodja Gnarning Walk trail, which translates to living and eating off the land.

"This new self-guided walk informs visitors as to how the traditional Nyoongar people used native plants and trees for food, shelter, tools and medicinal purposes."

The festival's month long program has a range of entertainment, activities, and workshops for people of all ages including interactive art and gardening workshops, to Santos Live Sundays, which will feature free live music and children's entertainment every Sunday throughout September.

In celebrating Kings Park's special trees, the Friends of Kings Park volunteer group has propagated a rare tree species Eucalyptus brandiana, named for Kings Park and Botanic Garden's Curator Grady Brand. A limited number of these seedlings will be available for purchase at their Native Plant Sale from 23rd to 25th September.

The festival runs through to Sunday 2nd October.

For more details about the festival and a full program guide go to www.kingsparkfestival.com.au