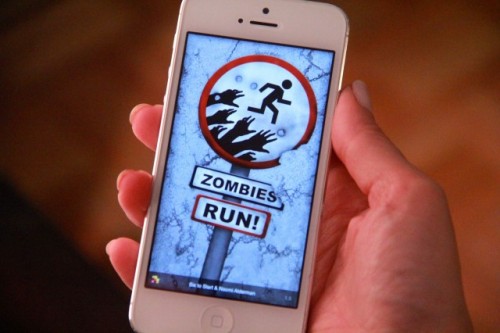 The recent phenomena of 'zombie' themed entertainment has crossed over to fitness with the release of 'Zombies, Run!' 2, a smartphone fitness game where users' run while pursued by an imaginary zombie horde.

Released on iOS and Android, the latest installment of the bestselling smartphone fitness game combines fitness, gameplay and a gripping story, turning the player's running into a post-apocalyptic action hero's fight for survival.

Every run is a mission in which the game's characters - voiced by a full cast of actors - let the player know why their run is so important. Through more than 60 'missions', audio drama clips are interleaved with songs from users' own music playlists and the further the user runs, the more supplies they collect to help the survivors 'back home'.

App co-creator Adrian Hon explains "in only a year, Zombies, Run! has helped hundreds of thousands of people around the world get into running and enjoy it more than ever before.

"This follow-up is a huge step forward, with fantastic new graphics, more advanced gameplay, improved accessibility, and of course, a continuation of our amazing story. And with our weekly missions, Zombies, Run! 2 will be like a TV show that you run to. There's nothing else out there like it."

Co-creator and lead writer Naomi Alderman added "I'm really thrilled with the response we've had to Season 1 of Zombies, Run! and Season 2 is only going to be bigger and better.

"With more than 60 new missions, we've really been able to tell a story on a large canvas - there are new characters to meet, the return of some old favourites, and important mysteries to solve. I couldn't be more excited for players to get running and get involved in the story - and the weekly updates mean that our fans can discuss the twists and turns as they unfold."

Through the game's free online service, ZombieLink, players can track their mission stats, view maps of their runs and track improvements in times and distances as their running skill progresses.

Zombies, Run! is also listed as part of the United Kingdom's exclusive National Health Service(NHS) Health Apps Library, a collection of smartphone apps which have been reviewed by the NHS and deemed beneficial to the user's health and fitness.

Currently, Zombies, Run! is the only game which is listed in the NHS Health Apps Library.

For more information go to www.zombiesrungame.com/