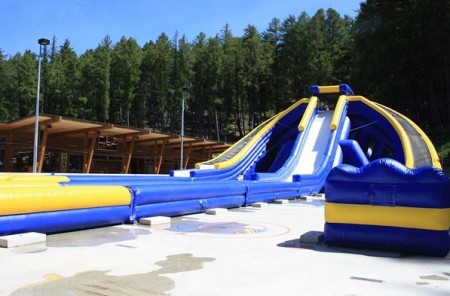 Tekapo Springs has announced that it is bringing the world's largest inflatable water slide to New Zealand, making it the first location outside the USA to have the attraction.

The oversized inflatable water slide with three slide chutes spans an impressive 11 metres high and 53 metres in length and will be located on Tekapo Springs' outdoor skating rink during the summer season.

The slide will be permanently inflated throughout the summer until the end of March 2014 and will replace the company's roller skating attraction which normally operates in summer.

Tekapo Springs General Manager Cathy Hemsworth said the company had been looking for "an iconic and fun" summer activity for some time and that the Trippo Slide literally "jumped out" as a perfect fit.

Hemsworth explained "we came across this via a contact in the USA and thought it looked fantastic. It's exactly what we've been searching for.

"We quickly measured the rink and everything added up. There's no other way to describe it other than to say that this slide is simply ginormous and we can't wait to try it out.

"It's a huge coup for us to be bringing the Trippo to New Zealand because there's nothing quite like this in Australasia and we're the first location outside the USA to have it."

The Trippo Slide is currently only being used by three other operators in the USA and hasn't even been officially launched to market yet.

The worldwide launch will be at the International Association of Amusement Parks and Attractions (IAAPA) show in Orlando, Florida in mid-November the world's largest amusement exhibition.

Tekapo Springs is an established tourism business on the shores of Lake Tekapo and provides year-round activities and fun for all the family. It has won numerous tourism and business awards since its inception just six years ago, including Category and Supreme Winner at the South Canterbury Chamber of Commerce Awards 2010

Hunter added "it's imperative that we continue to expand and grow the Mackenzie District's tourism economy and the addition of such a fun and quirky new product will attract a lot of interest from a broad range of visitors."

Tekapo Springs will stage a launch open weekend on 2nd and 3rd November with an array of events, promotions, guest appearances and surprises to be unveiled nearer the time.

For more information go to www.tekaposprings.co.nz/