A pioneering Hunter Valley Wonnarua Indigenous Cultural Hub and Madoo Museum is to be established following funding and land agreement.

Hunter Valley tourism and hotel entrepreneur, Dr Jerry Schwartz, will provide land in Cessnock for the construction of a cultural hub and museum celebrating the heritage of the local Wonnarua Indigenous community with the development also being facilitated by a $6.3 million grant from the NSW Government to the Wonnarua Nation Aboriginal Corporation (WNAC).

The Madoo Museum will house and showcase a rich collection of local Indigenous artefacts currently stored in various sites around the region. In addition, the renowned Morrison Collection – including canoes, stone axes, clubs, spears, boomerangs and hundreds of other artifacts from the Hunter Valley – will be relocated from the Australian Museum to the dedicated local site.

Details of the plans and the funding were recently announced onsite by NSW Government Member for the Upper Hunter, Michael Johnsen, Dr Jerry Schwartz and WNAC Chief Executive, Laurie Perry.

Dr Schwartz Is also proposing to build a revolving art gallery called ‘Hart’s Art’ to house a major exhibition of paintings by artist Dan Hart depicting the plight of Aborigines in Australia.

Dr Schwartz – who operates three hotels and a conference and events centre in the Hunter Valley/Newcastle region - is also working with Newcastle’s Awabakal Local Aboriginal Land Council to establish an Indigenous cultural centre in the restored Newcastle Post Office, which he acquired in 2018. 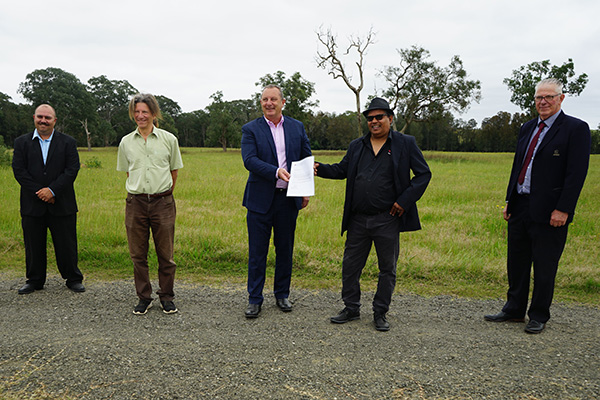 Welcoming the funding from the NSW Government, Dr Schwartz said the initiative would help preserve the heritage of the Wonnarua people and provide an opportunity for the wider community to share and experience their culture adding “from my discussions with Laurie Perry, the artefacts capture the heritage of the Wonnarua people, who are the original inhabitants of what is now known as the Hunter Valley.

“As well as being an important development to recognise Wonnarua heritage, we believe the Museum will become a focal point for cultural tourism. We envisage that the Museum and cultural centre will attract Indigenous, school and special interest groups to the region, and we will look to increase accommodation options at my Hunter Valley property to cater for them.”

Dr Schwartz said that the cultural centre would include interactive participation through art shows, boomerang technique and a café focusing on bush tucker and indigenous produce.

“The creation of the Madoo Museum Cultural Hub will not only honour our people’s heritage and culture, it will provide the opportunity to grow local Aboriginal tourism and employment.”

The Collection is named after Singleton-born newspaper owner, Alexander Morrison, who collected over 120 Aboriginal cultural objects at the turn of the 20th century, many coming from the St Clair mission, where Wonnarua Aboriginal families lived at the time.

One of the residents of St Clair was Sarah Madoo, who lived to 106, and was believed to be the oldest Aborigine in Australia when she passed-away in 1941. Sarah Madoo was Laurie Perry’s great-great grandmother.

For full details about the Morrison Collection click here