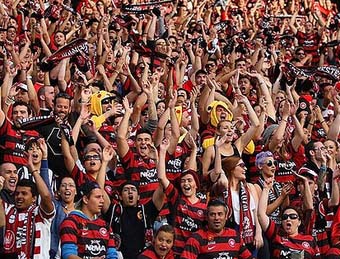 The Western Sydney Wanderers have rejected 'excessive' police proposals to crack down on crowd behaviour at its home games.

The A-League club believe the proposals, which included prohibiting banners and flags, and stopping supporters marching en-masse to the ground, will detract from its home ground experience.

Ahead of the A-League's season kick-off in a fortnight, local Parramatta authorities and NSW Police presented the club's supporter group the Red and Black Bloc with a number of recommended match-day regulations.

Police also want a zero tolerance on swearing, as well as banning any standing in aisles or side-to-side movement in the crowd.

The A-League club, which has been acting as a mediator between the authorities and its supporter base two parties for some months, was critical of the proposals.

In a statement the Club explained “while the club will never tolerate flares or any form of anti-social behaviour, the club has opposed the severity of the proposals and what we believe is excessive and we feel compromises the enjoyable football experience.”

Some members of the Red and Black Bloc clashed with the police at a game in April when authorities were alleged to have used pepper spray on fans.

The Wanderers, who play their FFA Cup quarter-final against Perth next week, kick off their 2015/16 A-League season at Pirtek Stadium against the Brisbane Roar on 8th October.