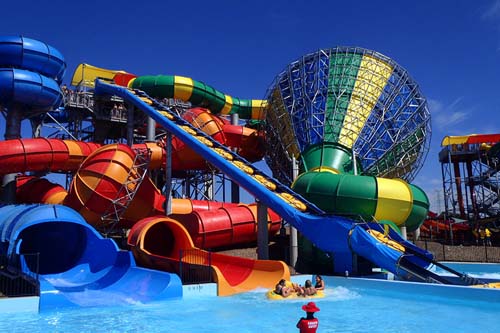 As a result, earnings from Village Roadshow's key theme park division fell 4% to $92.5 million for the 2014/15 financial year.

Village Roadshow co-Chief Executive Graham Burke described the year as "shockingly abhorrent", stating "there was torrential rain on so many of the key holiday days. Where we would have expected 15,000-20,00o people (attending our theme parks) we got 1,500 (on key days)."

Burke said the rain cost the company between $5 and $7 million dollars in profit and stopped what would have been a record year across the group.

The company expects an improvement in the 2016 financial year, with Burke adding "based on the law of averages, and there's some science to long range weather forecasts, this year with good weather, we should be looking to perform at more normalised level."

The company hopes to boost ticket sales by dropping prices and encouraging people to buy tickets as early as possible.

In the USA, returns from the Las Vegas Wet'n'Wild waterpark dropped 12% following the opening of a competing waterpark nearby.

Burke said the outlook was very positive for the upcoming year with the final instalment of the Hunger Games franchise and new James Bond and Star Wars movies due for release.

The company expects to keep increasing overall spend per person by introducing hot food at the candy bar.

However, distribution rights to the hugely popular Game of Thrones and The Hobbit couldn't offset the company's film distribution business with earnings down 17%

While the DVD market declined, the company's television earnings lifted 21% thanks to a multi-year agreement with Netflix.

Released in June, the TEA/AECOM Theme Index and Museum Index 2014 described 2014 as being behind an “indifferent year” for water park attendance in some parts of Asia, due to “weather and other factors".