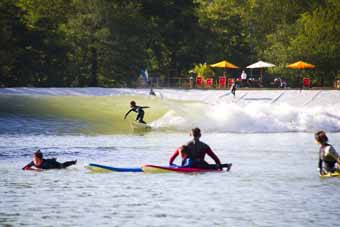 Aiming to revolutionise surfing participation in Australia, the Wave Park Group is planning to develop a series of state-of-the-art surf parks around the country.

Holding the exclusive rights to world leading Wavegarden wave generation technology, which creates the longest surfable man-made waves in the world, the Wave Park Group hopes that its planned facilities will transform the sport from being limited to specific coastal locations, daylight hours and requiring suitable ocean conditions.

Wavegarden's wave generation technology creates the world's longest and highest quality surf, potentially at any time, and in any location. With a range of companies, including surfing legend Kelly Slater's KS Wave Company and Webber Wave Pools, having been vying to develop the first operating wavepool attractions for surfers, Wavegarden already have a fully functioning demonstration lagoon in operation.

Located outside San Sebastian in the Basque Region of Northern Spain (as pictured), the 200 metre long lagoon creates waves 1.2 metres high, utilising both sides of the lagoon, creating a finite, linear surfing wave with simultaneous right and left hand breaks which flow towards bays at either ends of the lagoon.

The system works by displacing water with a device that travels along the central axis of the lagoon floor. This then creates a high performance, tubing wave that moves down the lagoon breaking along either side until it reaches a bay, where it is transformed into a rolling whitewater wave that is ideal for beginner surfers. The device then reverses and does the same thing in the opposite direction.

Speaking last year at the unveiling of the lagoon, Wavegarden Chief Executive José Manuel Odriozola stated "we are delighted to be able to reveal to the surfing world our new demonstration facility, which we expect to revolutionise the way people engage in surfing.

"Historically, participation in surfing has been limited due to the fact that it is required to be undertaken at specific coastal locations, in daylight hours and is highly dependent upon appropriate swell and weather conditions. With the development of the Wavegarden, we now have the ability to provide an authentic surfing experience in any location capable of siting a lagoon."

In Australia, Wave Park Group founder and Chief Executive Andrew Ross sees massive potential for the Wavegarden concept, believing that "this is going to completely change people's views about what is possible with a wave pool."

Ross explains that the length of the Wavegarden wave is only limited by the land available, and is discussing the introduction of the surfing lagoons with a range of potential partners including sporting bodies, visitor attractions, real estate developers and local and state governments.

With the Wavegarden concept under constant development, versions to be built in Australia will have larger electrical motors than the demonstration pool which will create larger waves.

As a result, Ross explains that "the version that we're bringing to Australia will generate a 2.0 metre high wave in the central part of the lagoon."

Ross sees massive potential for Wavegarden lagoons to transform surfing, adding "surfing is an activity enjoyed by millions of Australians for its unrivalled excitement, relaxed lifestyle and health benefits.

"It also an iconic sport that is part of our heritage and national identity."

However, Ross sees that Wavegarden lagoons have the potential to "boost surfing participation and will produce around one hundred thousand new surfers each year at each location.

"The lagoons provide a safe and easy environment for new surfers with consistent conditions that will accelerate learning by minimising the variables of ocean waves, and will make surfing far more convenient and accessible."