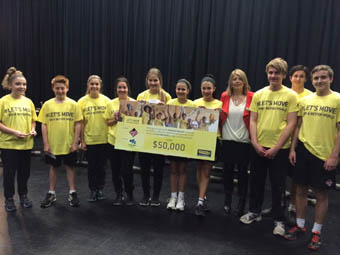 Banyule City Council's WaterMarc facility, Australia's top performer (and one of the top five performers worldwide) in Technogym’s ‘Let’s Move for a Better World’ campaign, has been recognised in an Award Ceremony held this week.

WaterMarc’s recognition included a donation of Technogym Easy Line equipment, along with educational seminars and training sessions to the value of $50,000, to Eltham’s St Helena Secondary College.

The College, which hosted the Award Ceremony for the 2014 Let's Move For a Better World Campaign, and its 1,500 students, will now embrace a more active lifestyle as the school was the lucky recipient of a state-of-the-art gym kit offered by Technogym and WaterMarc.

During the Award Ceremony, Technogym Australia, WaterMarc and Belgravia Leisure presented the equipment together with 100 students, a delegation of teachers, principal Karen Terry and Eltham’s local community and press. After a seminar on the importance of adopting an active lifestyle, led by Darren Hancock, Health Club Manager at WaterMarc, 10 students and a physical instructor enjoyed a 15-minute training session on the brand new Easy Line equipment. 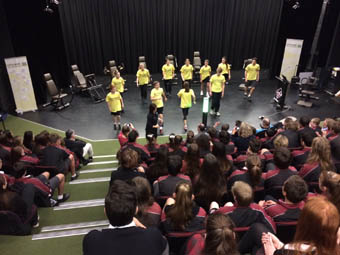 Having been Australia's top performer in Technogym’s global charity initiative to raise awareness for childhood obesity, Watermarc’s donation was based on its generating 3,743,464 Technogym MOVEs.

The Let’s Move for a Better World Campaign was made possible thanks to the mywellness cloud platform. It is a worldwide interactive competition created by Technogym that calls upon aquatic, fitness and recreation facilities to join in and put their members’ training to good use. During this year’s four-week contest a total of 20,000 people in some 200 fitness centres in 10 countries collected over 100 million MOVEs – Technogym’s movement unit of measure.

Commenting on the initiative, Technogym founder and President Nerio Alessandri stated “the Let’s Move for a Better World Campaign is the result of Technogym’s thirty-year long commitment to improving Wellness around the world. The campaign is helping to build a more sustainable society and educational platform for the younger generation on the importance of health and wellness.” – Nerio Alessandri, President and Founder of Technogym.

Use of the Belgravia Leisure managed facility’s personal trainers also increased by 10% during the Campaign.

For more information go to www.technogym.com/letsmove.

Clubs and facilities can also pre-register for the next edition of the Let’s Move for a Better World Campaign which will start in March 2015.

Technogym has also signed an exclusive-supplier contract fitness equipment supplier for all athletic preparation centres for the Rio 2016 Olympic Games.

For the first Olympic Games in South Americao, Technogym will provide a full range of equipment for the main training centre (approximately 2,000 metres2) at the Olympic Village in Barra da Tijuca open to all athletes taking part to the Games, and will equip 15 centres and warm up areas specifically designed for the different disciplines at the competitions venues.

Technogym is expected to supply 1,000 pieces of equipment and install the Mywellness cloud digital platform to allow athletes to connect directly to their equipment of choice from their mobile devices with their personal training program. Technogym will also provide a team of 50 professional athletic trainers to manage the preparation centres and support the athletes as well as all related services (gym layout, installation and technical service).