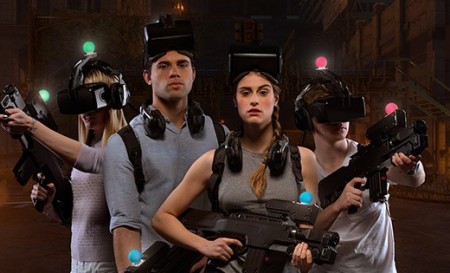 Zero Latency, a new 'virtual-reality theme park' has opened in a warehouse-sized facility in North Melbourne.

Allowing up to six people to inhabit a virtual world at a time, the  'free-roam' family entertainment centre uses Oculus Rift virtual-reality headsets and PlayStation Eye cameras to map players' movements into a game world.

Designed to offer a genuinely immersive virtual reality experience in a large space, players at Zero Latency strap on a backpack containing an Alienware Alpha PC - which renders the virtual environment for the users’ Oculus Rift DK2 headsets.

Players testify that it’s “like literally being in a video game.” 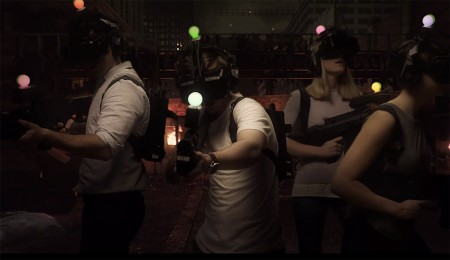 In addition to backpacks and headsets, players are also given large plastic rifles with buttons for various functions, to aid them in their virtual gaming world.

Zero Latency Director Scott Vandonkelaar worked on the project for more than three years before opening it to the public in the last week. Funding came from crowdfunding campaigns, the Victorian Government and an investment firm.

And while the headsets, cameras, and computers are built by other companies, the Zero Latency team had to write the software that allows those devices to work together to create simulated worlds.