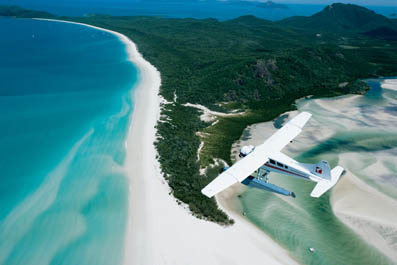 Tourism Australia has started filming at some landmark coastal locations with the material set to form the central pillar of its next major marketing campaign.

Production crews have begun visiting 12 coastal and aquatic sites across Australia as the tourism agency looks to combat the competitive threat posed by rival destinations vying for the tourism dollar.

A recent Tourism Australia strategy video suggested this was as a “concerning trend”.

Filming began at Katherine Gorge in the Northern Territory last weekend before moving to the Great Barrier Reef.

Other locations on the nationwide tour include Kangaroo Island in South Australia, Whitehaven Beach in the WhitSundays and Lake Burley Griffin in the Australian Capital Territory, while swimming with dolphins and soaring over the Twelve Apostles in a helicopter will also be showcased.

A multi-platform marketing campaign will launch in January with a $40 million roll out across China, US, Japan, UK and New Zealand.

States and territories, who are responsible for domestic marketing, will be able to use material for Australia-based campaigns.

The focus on Australia’s coastal and aquatic areas will aim to re-establish the strength and appeal of Australia’s aquatic and coastal areas in the fiercely competitive tourism space.

The campaign will be supplemented by a three-part documentary fronted by veteran natural history presenter Sir David Attenborough that will be broadcast air in December.