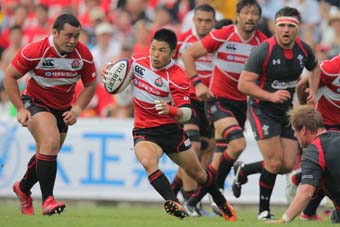 The addition of Argentine and Japanese franchises to the Super Rugby pan-regional club competition has been confirmed this week.

Super Rugby organiser SANZAR, the umbrella body for the Australian, New Zealand and South African unions, has completed the competition’s expansion to 18 teams from 2016 by formally confirming the participation of the Japan Rugby Football Union (JRFU) and Union Argentina de Rugby (UAR).

SANZAR Chief Executive Greg Peters stated “it gives us great pleasure to welcome the JRFU and UAR who will join the Kings from South Africa as Super Rugby prepares to expand into a bold and exciting new era.

“As top 10 ranked rugby nations with established high performance level leagues and over 100,000 players each, there is no doubt as to Japan and Argentina's rugby readiness and passion for the sport.

“With a heritage stretching back some 115 years, Japan also offers tremendous infrastructure and an active fan base that we view as pivotal to the ongoing sustainability of the team. Japan has also been the focus of strategic investment by the International Rugby Board (now World Rugby) and we view the region as a high growth, high potential sports and economic market with the 2019 Rugby World Cup, the 2020 Olympic Games and now Super Rugby on the imminent horizon.”

The confirmation is the final stage of formalities and paves the way for the Tokyo and Buenos Aires-based franchises to start contracting players and staff.

With Super Rugby set to expand from its current 15 teams in 2016, SANZAR announced last month that the Japanese union was is “preferred candidate” for expansion in Asia – with the other new teams from Argentina and South Africa.

The JRFU had been bidding against Singapore for the 18th team, but the Japanese union’s bid go over the line as a result of Japan’s longer rugby history and its hosting of the 2019 Rugby World Cup.

The Japanese team will be based at Tokyo's Prince Chichibu Memorial Rugby Stadium, but will play three home games per season at the Singapore Sports Hub.

Both the Japanese and Argentine teams will play in Super Rugby’s South African Group and will be positioned in opposing conferences with thee final composition of these conferences is subject to approval by the South African Rugby Union (SARU).

Travel times had been cited as a concern for a potential Japanese franchise, with 10-hour flight times for teams travelling between South Africa and Singapore, and Tokyo another eight hours by air from the city-state.

Commenting on the successful bid, JRFU Chairman Tatsuzo Yabe stated “it is absolutely essential for us to participate in the competition as we move toward a successful Rugby World Cup here in 2019.

“Joining the world’s highest international league is a challenge that will require significant transformation and tremendous efforts by us.

“However, it will certainly bring innovation to not only Japan, but also the Asian region as a whole.

“We are also convinced that participating in Super Rugby will encourage greater interest in our domestic rugby and it will become a big dream and goal for those who play rugby in Japan - especially younger generations - to compete at this level.

“We believe that such positive development will be a driving force for Japan rugby to move forward on the world stage and we will continue to make every endeavour to be successful at this level as we look toward Super Rugby in 2016, the 2019 Rugby World Cup and beyond.”

The growth of women's rugby in Asia was a feature in the September/October 2014 issue of Australasian Leisure Management.