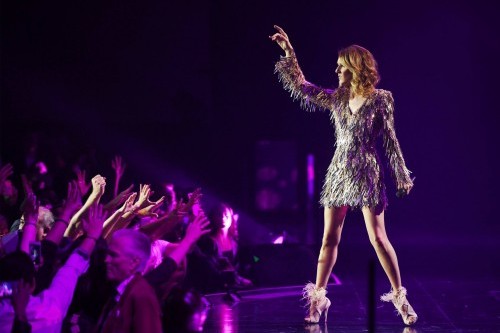 David Farrier, a prominent New Zealand journalist and filmmaker, attacked the ticketing giant’s “officially endorsed ‘resale’ sites” in a series of tweets after Dion’s tickets appeared on the secondary market soon after they sold out.

General release tickets went on sale at midday on Monday 19th February and sold within hours, with tickets appearing on resale sites immediately at double the price.

Ticketmaster’s own resale site advertised tickets for between $800 and $1150 on Monday afternoon.

The cheapest ticket on Ticketmaster’s resale site was for an upper seat, located towards the back of the arena, for $460. The ticket, originally sold for $119, had been marked up by $341 – almost two-and-a-half times its original value.

Farrier tweeted: “I signed up for the Celine dion presale last week: no luck today, her 2 concerts went on general sale and both cme back with ‘no results match you search’… but at the bottom is a handy link to ‘find resale tickets.’”

In a separate tweet he added: “We all know the concert ticket industry is screwed both here in New Zealand and overseas, but I find an officially endorsed ‘resale’ site – run by @ticketmaster – to be deeply offensive to music fans.” 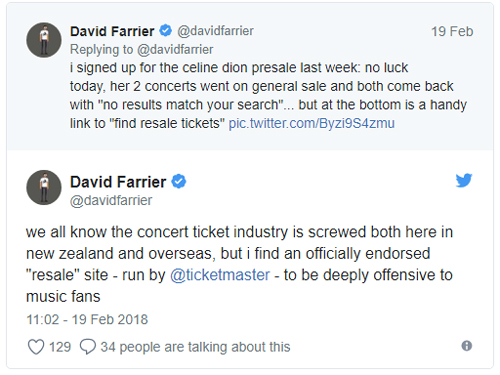 A Ticketmaster spokesperson provided a statement in defence of the service, advising that its was a safe avenue for people to buy tickets from third parties.

The spokesperson advised “tTicketing marketplaces are dynamic and react to demand. With high-profile events, tickets are sometimes listed at prices higher than the face value.”

Dion is set to perform at Auckland’s Spark Arena on 11th and 12th August.