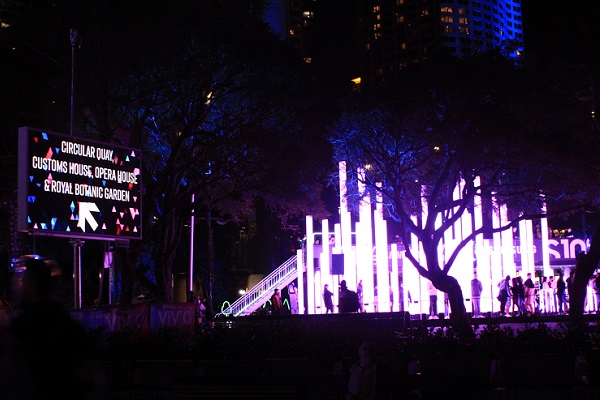 Australian entertainment technology company TDC (Technical Direction Company) has announced the release of its new and unique LIVE View Signage solution to provide visitor information and help manage traffic and pedestrian flow at any event where numbers of people are gathered - from conferences and exhibitions to city-wide festivals and other major public events.

The introduction is another development in TDC’s range of Live View deployments including automation and gaming systems, with information that Live View Signage can show including event news, wayfinding, public transport schedules, weather updates and much more.

TDC founder and Managing Director, Michael Hassett explains “this innovation is something people might not associate with a company widely regarded as first and foremost a video company.

“What LIVE View Signage does, however, is to bring together the extensive experience and expertise we’ve built up over many years in video, screens and major events to create a solution that uniquely addresses the needs of anyone organising a large gathering of people - whether hundreds of them or thousands of them.”

“City-wide festivals, for example, are becoming increasingly commonplace, often attracting hundreds of thousands of residents and visitors - on occasions such as New Year’s Eve.

“They can, however, be extremely challenging for the organisers. Traffic diversions may be put in place, or public transport schedules may change - and the requirement is to communicate this kind of information throughout the festival, to increase safety, convenience and enjoyment. That’s what LIVE View Signage is designed to do.”

Hassett explains that in a typical large event scenario, there can be enormous numbers of people - unfamiliar with the city - all trying to find the same venue heading in the same direction, potentially causing congestion and representing a safety risk.

In response, authorities may look to reroute them or to close some roads to traffic. A failure somewhere in the public transportation system may require visitors to be diverted to alternatives.

LIVE View Signage helps deliver the communication necessary to respond to changes in the event environment.

Because the system is cloud-based, it is both very straightforward to install and immensely scalable - from corporate events to city-wide festivals, such as this year’s Vivid Sydney. Vivid Sydney used 14 high resolution, five metre diagonal LED screens installed at strategic points throughout the city.

“At Vivid Sydney this year we wanted to connect with our visitors via a new platform to provide them with timely, relevant information about their surroundings and enhance their time in the city.

“One of the main benefits of the TDC LIVE View Signage is its dynamic capabilities, allowing us to change messaging in real time in response to events.

“We worked alongside key stakeholders including NSW Police, traffic management, Transport for NSW and other authorities to communicate clearly and efficiently with our visitors. This innovative signage helped us manage footfall of over two million people over a period of three weeks. It made a huge difference to the event - and, we believe, made it a safer, more enjoyable experience for everyone involved.”

The LIVE View Signage system at Vivid Sydney was controlled from a command and control centre provided by TDC, which also housed screens connected to cameras located at key points throughout the city. However, because the system is web-based, it can be controlled by anyone from anywhere with an Internet connection and a browser. This also allows event management to be a truly collaborative process.

Presentations at conferences or performances at festivals can also be streamed to LIVE View Signage screens, as can social media feeds, news/sports and so on. Beyond this, the cost of deploying LIVE View Signage can often be defrayed by offering advertising opportunities.

Drew Ferors, Technical Service and New Media Manager at TDC, concluded “LIVE View Signage is, in effect, a digital signage system with its own content management system that is specifically designed for easily, flexibly and responsively managing information flow to everyone participating - either directly or indirectly - at an event.

“There’s a number of potential applications that it can be used for: we’re working on conferences, AGMs, corporate events and so on - all of which can use the purpose-designed capabilities of LIVE View Signage.”

Image: The system made its debut at this year’s Vivid Sydney.