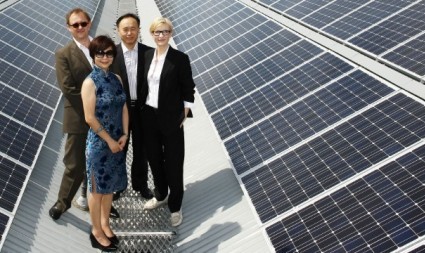 An array of 1,906 solar panels on the roof of The Wharf theatre on Sydney Harbour have been switched on by the company's Artistic Directors actress Cate Blanchett and her husband Andrew Upton.

The rooftop solar power system is the second largest in Australia and will provide up to 70% of the company's power supply (equivalent to the power needs of 46 average homes).

After flipping a symbolic two-metre tall timber light switch, Blanchett said powering the company's heritage building with the sun was about more than generating electricity, stating "we were looking to reconnect the company to the city and we were looking to make it cutting edge again.

Upton said the solar panels were a "gesture" to Sydney, stating "we both sensed that this roof above our heads was a real resource because it is out there in the open and it is a very public roof ... it's a really key part of the city, on the harbour."

With climate change an issue close to their hearts, the Directors said the arts needed to address the issues faced by society, including global warming.

Blanchett added "if theatre doesn't engage with the big issues that face human beings and society generally, then it very quickly becomes irrelevant,

"I think it's the arts' role absolutely to be a place where ideas are disseminated and discussed and thrown around and I think that, in terms of leading change, we are content providers, we're innovators, that's what we do as a sector."

The solar initiative is part of the Sydney Theatre Company's Greening The Wharf which aims to transform the venue into a unique demonstration of how buildings (even heritage listed ones) can be made more sustainable. Believed to be a first for any theatre company in the world, the project aims to deliver most of STC's energy and water requirements from sustainable sources.

Efforts to raise funds for the project have been rewarded with a significant share of $1.17 million from the NSW Government's Public Facilities Program (a combined application with Arts NSW who will administer the grant on behalf of all tenants of Pier4/5). In addition EnergyAustralia has become the lead corporate partner and Energy Advisor for Greening The Wharf in a three year corporate partnership.

For more information go to www.sydneytheatre.com.au/visit/greening-the-wharf