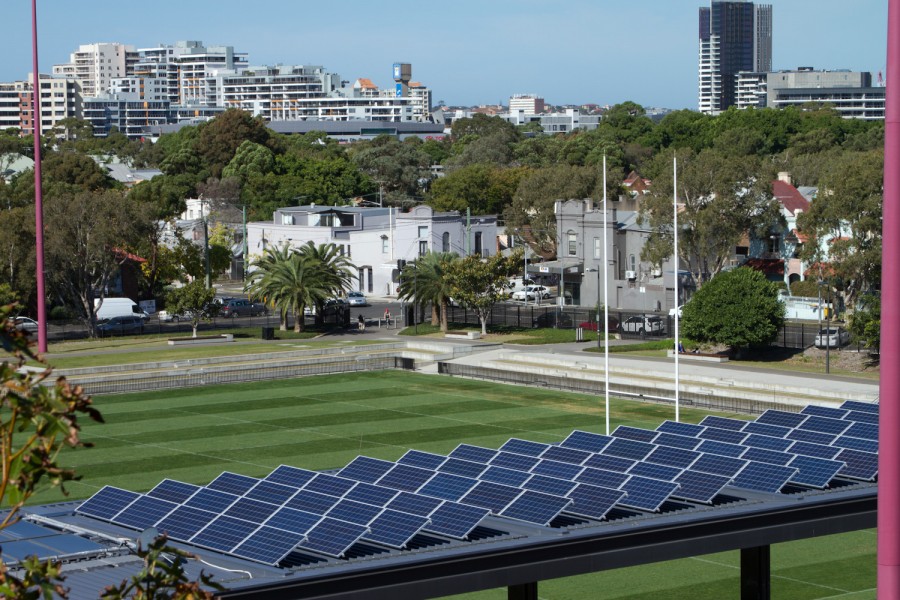 The City of Sydney is poised to boost its leadership in solar power usage, with panels being installed on major City-owned buildings, grandstands, depots and libraries across the city.

Following a tender process, the City has selected Solgen Energy to undertake a $6 million project to fit solar photovoltaic (PV) panels to more than 30 sites over the next two years to generate 12.5% of the electricity needs of all City properties.

The panels will have a total electrical capacity of more than 1,250 kWp (kilowatt peak), making it Australia's largest building-mounted solar PV program, and covering some 9,000 metres2 (greater than the area of a regulation football field - 6,800 metres2).

The panels could produce nearly 2,000,000 kWh (kilowatt hours) of electricity a year and are expected to reduce the City's annual carbon pollution by 2,100 tonnes.

Lord Mayor Clover Moore explained "the City of Sydney is delivering on its commitment to reduce carbon pollution by 70% and produce 30% of its electricity from renewable sources by 2030 - one of the most ambitious programs of any Australian government.

"The solar PV project produces no pollution when generating electricity - unlike coal-fired power, which is responsible for 80% of our pollution."

Currently, the largest building-based photovoltaic installations in Australia are at the University of Queensland (1,200 kilowatt peak - kWp) and Adelaide showground (1,000 kWp).

The City has already installed solar hot water and/or photovoltaic systems on 18 sites at a cost of $1 million, including Sydney Town Hall, libraries, community centres, childcare centres and depots in Redfern, Ultimo, Erskineville and Kings Cross. The largest installation was 240 solar panels installed on the historic Sydney Town Hall. Together these projects have reduced carbon pollution by 180 tonnes a year.