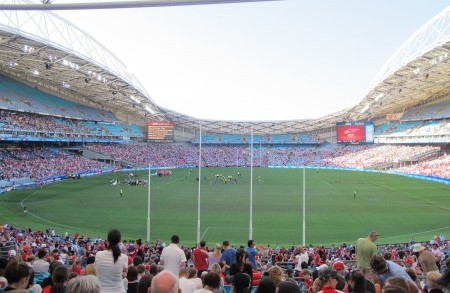 The Sydney Swans have ended their agreement to play home matches at ANZ Stadium a year early winding up a 14-year partnership that began in 2002.

The Swans will now play all of their home games at the Sydney Cricket Ground, their home since 1982, in 2016.

Sydney’s round 1,7 and 18 games against Collingwood, Essendon and Carlton that were scheduled for ANZ Stadium have been shifted to the SCG.

Sydney Swans Chief Executive and Managing Director, Andrew Ireland, said in a statement “we are extremely thankful to ANZ Stadium management for working with us to bring forward the end of our agreement, allowing us to return home a year earlier than anticipated.

“Along with ANZ Stadium management, I would like to thank the SCG Trust for not only accommodating the relocation of three matches at short notice, but also working with us to ensure that the complex ANZ commercial agreement could be reworked.

“Our move home to the SCG is exciting for our entire club. We have listened to our fans and we look forward to seeing them pack the SCG in 2016.”

The AFL has confirmed that any AFL finals that the Sydney Swans are entitled to host in 2016 will be played at ANZ Stadium.

The management of ANZ Stadium has suggested that the Swans’ early departure may enable the Stadium’s event partners to fast-track well-advanced plans to redevelop the venue.

Wishing the Swans well, ANZ Stadium Managing Director  Daryl Kerry commented “the Sydney Swans have been event partners of the Stadium since 2002 and have significantly grown their brand in the Greater Sydney area. We wish the Swans well.

“It goes to the heart of our 15-year relationship that the Swans have made an exceptional offer to ANZ Stadium’s valued Members and Corporate Clients going forward.”

ANZ Stadium holds the record for the largest AFL crowd outside of Victoria, with 72,393 attending the club’s clash with Collingwood in 2003. More than two million fans have attended Swans matches at ANZ Stadium over the past 14 years.