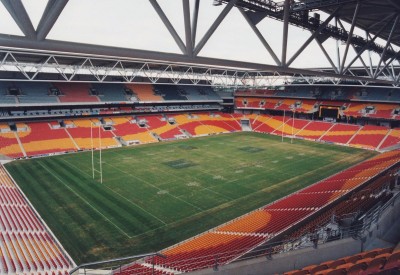 The surface at Suncorp Stadium, which hosts A-League fixtures and the two rugby codes, was described as "very, very, very, very bad" by Perrin after his team's opening win over Saudi Arabia at the ground.

In advance of this weekend's game, Kruse is the latest person to join in criticising the playing surface at Suncorp Stadium - which has been dogged by criticism since the refurbished venue opened in 2003.

Kruse told the ABC "I've seen the pitch, it's a disgrace and not up to the standard it should be.

"Brisbane has never had a good surface for as long as I can remember and I don't understand why.

"Obviously rugby league plays hard on that surface, they have Test matches and a lot of concerts as well but it's not good. It makes it difficult to play football.

"It's the same for both teams, we'll both be wanting to play football on it which will be difficult but it's no excuse in the end."

In June 2013, Suncorp Stadium's surface was blamed for contributing to Wallabies back Kurtley Beale missing his match-deciding penalty kick in the final moments of the Wallabies v British and Irish Lions rugby Test.

However, in 2011 A-League players voted Suncorp Stadium's pitch the best in the competition.

The Socceroos and South Korea have already qualified for Asian Cup quarter-finals but will battle for top spot in the group to play in Saturday's game.

Under the AFC's 'clean stadium' requirement for the Asian Cup, Suncorp Stadium, formerly Lang Park, is being referred to as Brisbane Stadium during the tournament.

The previously criticised Hunter Stadium in Newcastle received a $1.3 million surface upgrade in advance of the tournament.