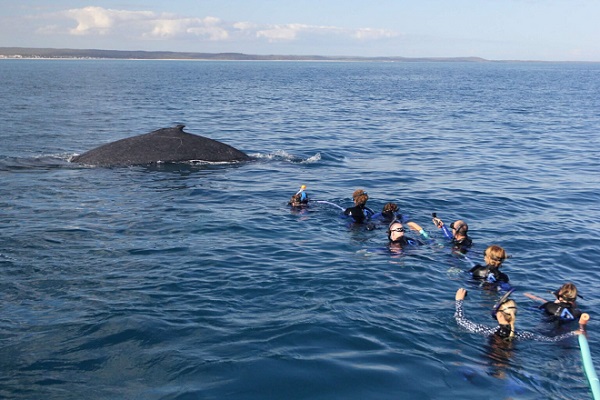 Concerned with potential impacts of marine tourism on whales, researchers have suggested guidelines and regulations for whale-watch tour operators worldwide to minimise disturbance of this activity on critical whale behaviour such as feeding and breeding.

Since the first commercial vessel ferried curious passengers out to sea to catch a glimpse of majestic migrating cetaceans, the skyrocketing demand for whale-watch tours has made marine tourism a global billion-dollar industry.

A newly released study by Chief Biologist Stephanie Stack, a leading research scientist with Pacific Whale Foundation, examines the impacts of swim-with-whale tourism on whale behaviour compared to those of commercial whale-watch tours. The three-year study was conducted on Australia’s East Coast in response to the Queensland Government green-lighting a trial program for swim-with-whale tourism in Hervey Bay - a resting ground for migrating humpback whales.

The 2014 Queensland Government-sponsored trial looked primarily at swimmer safety, including the risk of shark attacks, when engaging in swim-with-whale tourism. While there were isolated reports of whales acting aggressively - tail throws and pectoral flipper swipes - in the vicinity of swimmers tethered to a tour boat, the Australian Government ultimately approved swim-with-whale tours as a permanent commercial activity along the Queensland coast.

Stack explains “there was no research during the trial period on how this marine tourism activity will affect the whales.”

As the behavioural responses of humpback whales to the swim-with-whale tourism had not been examined in Queensland, preventing informed management of this industry, Pacific Whale Foundation initiated its own research in 2018.

Led by Stack, the study analysed whether swim-with-whale tourism results in significant behavioural changes markedly different from the impact on whales during commercial whale-watch tours. The goals of the study were:

The study utilised the same vessel, captain and crew for both commercial swim-with-whale and whale-watch tours. Swimming and non-swimming passengers were the only variables in the 75 swim-with-whale tours and 48 whale-watch tours conducted for the express purposes of this study. All tours related to the study strictly adhered to guidelines and legislation governing both marine tourism activities. 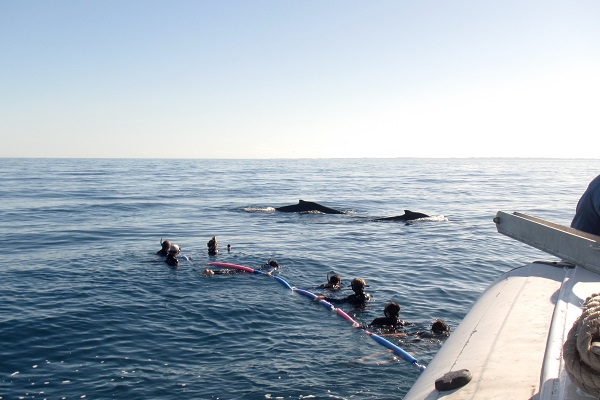 Stack noted “the number of direction changes made by the whales was highest when swimmers were in the water, and the whales did not resume undisturbed behaviour after the swimmers exited the water.”

In addition, there was a 50% reduction in the proportion of time that whales spent resting during swim-with-whale tours compared to whale-watch tours. In both tour types, the time spent engaging in various behaviours was impacted by the distance between the vessel and the whale(s).

These results support Stack’s conclusion that the behaviour of humpback whales in Hervey Bay was altered in response to swim-with-whale tourism. “As humpback whales are capital breeders with limited energy reserves, reducing disturbance to them is of high importance for their continued population recovery and for the sustainability of the marine tourism industry,” Stack writes. “In Australia, where swim-with-whale tourism is becoming more established, robust education and enforcement programs, combined with continued monitoring of population dynamics through scientific research, are needed to minimise impacts to the population and guide adaptive management strategies.”

Agreeing that the results of the scientific study clearly indicate a negative impact regarding the amount of energy used by whales when swimmers were in the water, Pacific Whale Foundation Eco-Adventures Australia (PWFEAA) Director of Operations, Andrew Ellis stated “this study affirmed data collected in other areas in the past years, such as Tonga and Western Australia, showing this could have a long-term effect on population sustainability.”

PWFEAA, a wholly owned subsidiary of PWF providing ecotours that help fund nonprofit marine research, conservation and education programs, will not offer opportunities for this type of marine tourism based on the study’s findings, according to Ellis.

He added “one of the most fantastic things we can do is watch wild animals in their own environment in a non-invasive way.

“Ongoing studies by many scientists have shown that regulated whale watching shows no long-term impact on whale populations and gives an incredible opportunity for education about our marine environment, effectively making whale-watch patrons future advocates for our environment.

“Hervey Bay, an existing marine park and world heritage area regulated by the highest level of environmental protection, has also been named as the first Whale Heritage Site, fully certified by World Cetacean Alliance. It is a very special place where whales and humans can coexist in a benign manner with carefully regulated whale-watching tours

“We don’t want that to change, and we certainly don’t want to adversely affect these amazing creatures. We urge the Australian government to consider increased regulation and monitoring should immersive experiences with these wild animals continue.”

Stack’s scientific paper, The Behavioural Impacts of Commercial Swimming with Whale Tours on Humpback Whales (Megaptera novaeangliae) in Hervey Bay, Australia, is published in Frontiers in Marine Science and available for review.