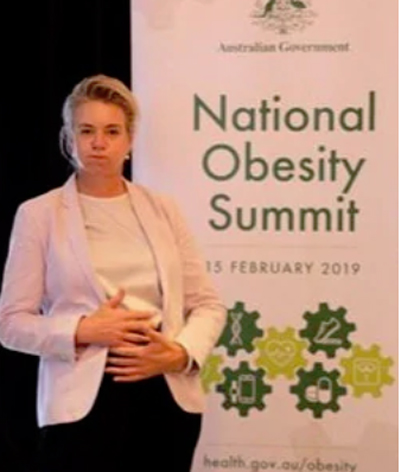 Federal Sports Minister Bridget McKenzie has issued a statement accepting the ridicule directed at her for mocking overweight people at the National Obesity Summit in Canberra on Friday.

Minister McKenzie apologised after an image emerged online appearing to show her deliberately sticking out her tummy, puffing out her cheeks and rubbing her stomach while posing next to a Summit placard.

The Victorian Senator yesterday defended her actions on Twitter saying she was demonstrating how she felt after a bad reaction to a heavy breakfast.

She advised "the issue of obesity is a matter I take very seriously and would never trivialise it, or to add in any way to stigmatisation.

“I sincerely apologise for this very unfortunate photo taken as I demonstrated how my stomach felt after scrambled eggs."

Today, Senator McKenzie released a more detailed statement advising "I again apologise for any offence taken by the unfortunate photo taken out of context at the Obesity Summit on Friday, and I am happy if my ridicule leads to action on the complex issue of obesity in this country.

"That is exactly the reason I called international and Australian experts together for the National Obesity Summit last week.

"The Summit focussed on the role of physical activity, primary health care clinicians, educators and governments to work collaboratively rather than in silos.

"At the Summit we heard from national and global experts because obesity is an international issue and we need to understand how other jurisdictions are tackling the problem. We also heard that stigma surrounding obesity can be a barrier to help being accessed."

The latest Australian Bureau of Statistics National Health Survey shows that previous efforts to combat obesity have had limited success.

As reported at the Summit, two-thirds of adults and a quarter of children aged from five to 17 years are now overweight or obese.

While the rate for children has been stable for 10 years, the proportion of adults who are not just overweight but obese has risen from 27.9% to 31.3%.

Minister McKenzie added "overweight and obesity not only compromise quality of life, they are strongly linked to preventable chronic diseases - heart disease, diabetes, lung disease, certain cancers, depression and arthritis, among others.

"We know that there is not one simple solution to tackling the problem so we need to examine all options and develop a multi-faceted approach."

Image: Senator McKenzie controversiallysticking out her tummy, puffing out her cheeks and rubbing her stomach while posing next to a National Obesity Summit in Canberra on Friday. Sourcre: Twitter.