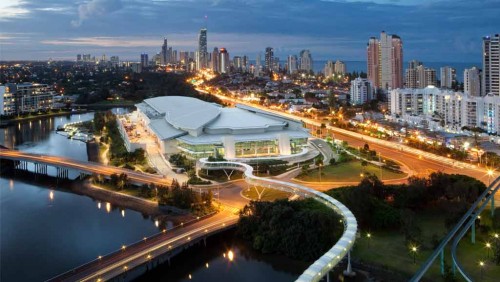 Following the success of its 2014 edition, the SPLASH! Pool & Spa Trade Show, Australasia’s largest swimming pool and spa industry event, will expand in 2016 - moving to the Gold Coast Convention and Exhibition Centre (GCCEC).

SPLASH! on the Gold Coast has been held at Jupiters since 2006 when Interpoint Events took over its management from Carol and Kevin Benger.

The event has since grown into one of Australia’s most successful trade shows and in 2010 it won the Best Australian Show (Trade or Consumer) at the Exhibition & Event Association of Australia (EEAA) Awards.

Commenting on the growth of the biennial event, Interpoint Events Managing Director Simon Cooper explains "we expanded into one marquee in 2008 and added a second marquee in 2014, but demand for exhibition space continues to grow."

Cooper says the potential to expand at Jupiters has been exhausted, and while he has been considering this move for some time, the timing is right for 2016. The change of venue provides the exhibition with 30% more exhibition space and also enables all exhibitors to be located in the one hall – something that a number of exhibitors had been asking for.

Cooper adds "as well as all being in the one hall, the exhibitors will have easier access and higher ceilings.

"For visitors, it will mean they can visit all the companies in one place and there will be dedicated meeting places built on the show floor for improved networking,” he says. “Also, the GCCEC is actually connected to Jupiters via a covered walkway, so it will still be extremely convenient for visitors and exhibitors staying at the casino.”

The 2014 SPLASH! on the Gold Coast was the biggest pool and spa trade show ever held in Australia with more than 100 companies showcasing products and services and more than 2,000 people attending.

Additionally, there were a large number of linked events including the first ever World Aquatic Health Conference held outside the US and the first ever SPASA Australia Awards Gala.

Click here for contact details for SPLASH! along with other industry events in the Australasian Leisure Management Calendar.