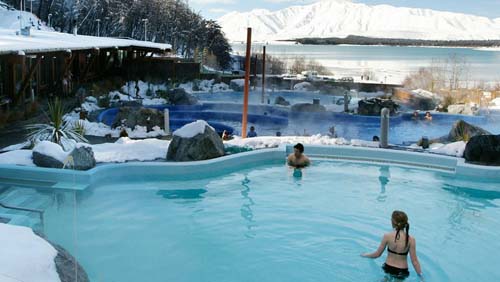 Opportunities for hot springs and spa development in Rotorua are on the agenda for Rotorua Mayor Stephanie 'Steve' Chadwick when she visits Rotorua’s Japanese sister city of Beppu this week.

Mayor Chadwick has accepted an invitation from the Mayor of Beppu, Hiroshi Hamada, to join commemorations marking Beppu’s 90th anniversary of city status, and the 100th anniversary of the city’s famous hot springs festival.

Mayor Chadwick said Beppu was recognised internationally for its highly-developed geothermal attractions and hot springs – or ‘onsen’ as they are known in Japan – and as a significant tourism destination.

She explained “Mayor Hamada’s invitation to join him for Beppu’s anniversary celebrations also provides a timely opportunity to investigate hot springs and geothermal opportunities for our city.

“I’ve lined up a number of business meetings in Beppu and Tokyo with people involved in these sectors and I have site inspections arranged for some of Beppu’s spa and hot springs developments. I’m also going to be looking at some examples of geothermal power generation for tourism facilities, and ‘jigoku mushi’ - cooking using geothermal-generated steam.

“Our council wants to see the unique natural geothermal attributes of our own Kuirau Park substantially developed in the future so the park can become a focal point of Rotorua’s geothermal experience.

"At present Kuirau Park is not realising its potential. It’s under-developed, under-utilised and falls short as a quality international visitor attraction; so this is a chance to look at ideas for transforming Kuirau Park into something special.”

Mayor Chadwick said she campaigned during last year’s mayoral election for geothermal opportunities to be developed to their full potential, and for Rotorua to build a reputation as the South Pacific’s spa capital.

“I’m hoping to explore the possibility of partnerships with our Beppu friends as I think we can learn from their extensive expertise and their centuries of successful hot springs development.”

A city of 125,000 people located on Japan’s southern island of Kyushu, Beppu became a sister city of Rotorua in 1987. Over the years there have been numerous visits to Rotorua by groups and individuals from Beppu, especially related to the education sector and for cultural and sporting exchanges.

The Rotorua District Council delegation will be travelling between 1st and 7th April.

Interest in maximising the potential of New Zealand's spas and hot springs has also seen Ngāi Tahu Tourism (NTT) begin the process to develop a major hot pools and spa complex in Queenstown - see below.