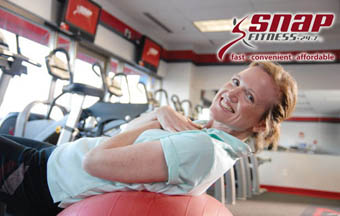 After only three years in operation, Snap Fitness has opened its 100th 24/7 gym in Australia and New Zealand with the launch of a new club in Arana Hills, Queensland.

Founded in the United States in 2003, Snap Fitness has grown quickly through 44 US states and internationally into Canada, India, Mexico, Australia and New Zealand.

Launching in Australia and New Zealand in 2009 with a club in Strathpine, Queensland the group grew in a controlled manner, opening its 10th club in November 2010.

This conservative approach allowed Snap Fitness to tailor it's offering to local markets and separate itself from direct competition. Snap Fitness is now known for its customer service, state of the art equipment and flexible, no contract options.

Since that 10th club opening, Snap Fitness has opened another 90 clubs in only 18 months, proving its patience and offering are a winning formula.

Snap Fitness Managing Director Roz Barker explains "we knew this day would come based on the success of the Snap model around the world and based on the response from (the) Australian and New Zealand public to embrace our fast, affordable and convenient approach to their health and fitness.

"We are very excited this 100th club has come within our first three years of operation and it is a great milestone to celebrate."

Barker says this success in and out of the clubs has led to its 100th club opening which "is a massive achievement for me personally. The next milestone will be 100,000 members, this will be achieved in the next four weeks!"

In addition to the 100,000 members, Snap Fitness is looking into both the immediate future and beyond with Barker adding "prior to Christmas this will increase to approximately 125 (clubs), giving us 100 in Australia and 25 in New Zealand if all fall into place.

"2013 looks to be massive and we will be welcoming many new franchisee's as well as a large number of existing franchisee's extending their portfolios."

To meet this rapid growth Barker concludes "we too need to keep one step ahead of the market so stay tuned for new initiatives for the Snap fitness model."

For more information go to www.snapfitness.com.au