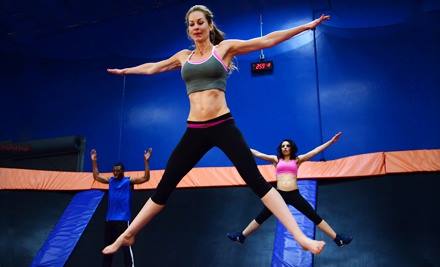 The exercise benefits of Australia's growing number of commercial trampoline arenas are getting recognised for aiding users cardiovascular fitness.

Paraska said health benefits include cardiovascular fitness, stronger bones and reduced risk of high blood pressure, highlighting that an hour of vigorous jumping is closely equivalent to the same time spent running and burns up to 900 calories.

However, in the wake of a number of reported injuries at trampoline arenas, Paraska pointed out that trampoling did have risks, stating "it’s safe to say that some people should avoid it especially if they have some sort of physical limitation.

"It just depends on the person and the how vigorous the exercise is.”

Sky Zone, the operator of two of Australia's largest indoor trampoline arenas, is advancing trampoling fitness with its SkyFit programs

Commenting on SkyFit, co-creator Nic Monteforte explains “studies have shown that training on trampolines - an 'unstable' environment - can burn between 400 and 500 calories within a 30-minute period.

"Anatomically, training in unstable environments will make your body engage and incorporate core - mid section - and stabilising muscles around the joints of your body, far more effectively than what a standard gym workout can achieve.”

The idea of Montefort and business partner Shane Byrne, SkyFit came about from a longstanding dream to translate the benefits of a jumping castle workout into a gym.

For Sky Zone, the pair developed the world’s first fully accredited trampoline workout classes that sees all instructors put through an eight hour training workshops that gives them an accreditation and 5 CEC points.

Instructors are also trained to ensure that every participant exercises to a level that is within their capabilities.

The classes have all been developed with Stephen Parker, one of Australias leading Group Fitness Trainers and are build on the five basic movement patterns.

Most of all, Montefort adds “the classes bring the fun back to fitness. Our current members all keep coming back because they forget they are working out as its so much fun.”

Benefits of the trampoline workouts include:

• Improved strength in the core, as well as both the upper and lower body.

• Significantly reduced joint shock, as the trampoline absorbs approximately 80 per cent of the shock when performing plyometric exercises, or jogging on the spot (for example). This fact also makes trampoline based exercises a great option for people recovering from injuries or older exercisers.

• It’s a full body workout, and because it’s occurring in an unstable environment, the body needs to engage the stabiliser muscles around the joints constantly – ensuring greater and faster results.

SkyFit are also be offering a Personal Training Program for trainers who are looking for a new way to help clients achieve their goals.