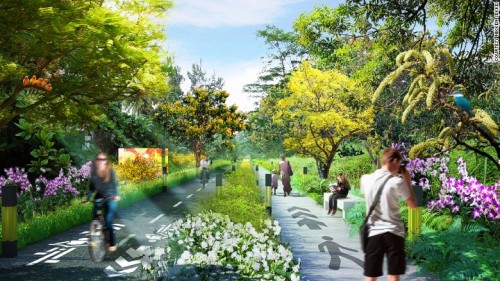 Singapore's Urban Redevelopment Authority has announced details of it plans to turn a disused railway line into a 24-kilometre long area of green space.

Inspired by New York's High Line and Sydney’s Goods Line project, Japanese firm Nikken Sekkei has been chosen to transform the railway corridor, which runs from the from the south of the island to the Woodlands Crossing in the north, into a green corridor with cycle paths, climbing walls, nature reserves, seating areas and water features.

Nikken Sekkei’s proposal, named Lines of Life, was selected by the Urban Redevelopment Authority (URA) as the winner in the Singapore Rail Corridor competition at the end of last year.

Commenting on the project, Nikken Sekkei Director of Integrated Public Design, Wataru Tanaka explained “we captured this design opportunity, not merely as a landscape design assignment but more as public space design project.

"We took the design approach to integrate the communities the rail corridor touches into the design itself to make a truly meaningful public asset within a broader urban context."

The URA brief called for a comprehensive masterplan, including specific design solutions for 10 key nodes. Nikken Sekkei has developed a different strategy for all 10, with names like Northern Nexus, Canal Village, Passage of Light and Green Connector. 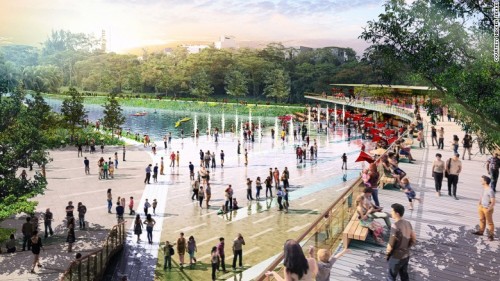 The firm has also broken the volume up into eight distinctive sections, with a total of 122 proposed access points, while old railway buildings and artifacts will be restored and revamped "to celebrate the railway heritage" of the area.

University of Freiburg (Germany) Professor Wulf Daseking, a member of the judging panel, commented that the design “presents visionary ideas for the former train line to be planned and integrated seamlessly with its diverse surroundings, over many years.

"The plan is a wise guide with brilliant ideas that is also flexible in terms of implementation.

"Green areas, footpaths and bicycle paths as well as surrounding developments along the Rail Corridor are woven together in a very convincing way."

Named the Rail Corridor, the former rail route once served trains heading across the border into Malaysia from the Tanjong Pagar Railway Terminal in the south of Singapore.

The line was abandoned in 2011 when the terminus was relocated from Tanjong Pagar to Woodlands in the north of the city. 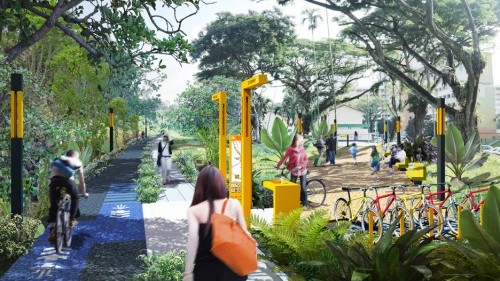 URA Planning Director Tan See Nin “this provides us with a unique opportunity to build a very special community space.”

Nikken Sekkei spokesperson Shoji Kaneko went on to tell CNN that the green corridor will be a celebration of a huge geographical scope and of the diversity of Singapore's people and culture, a location that "stitches together the entire nation, weaving itself into nature and the lives of those around it.

"We hope the project will become a catalyst to urban growth as well as community bonding, and gradually become a central spine that symbolizes a new, healthy and active lifestyle of Singapore."

The URA also named two winning projects in conjunction with the competition. MKPL Architects and Turenscape International were awarded for a housing and garden scheme alongside the railway corridor, as well as for their plan for the adaptive reuse of the former Tanjong Pagar Railway Station.

Images: Artist's impressions of Singapore's Lines of Life of project. Lower image shows a cycle path that will span the entire 24 kilometres of the design.