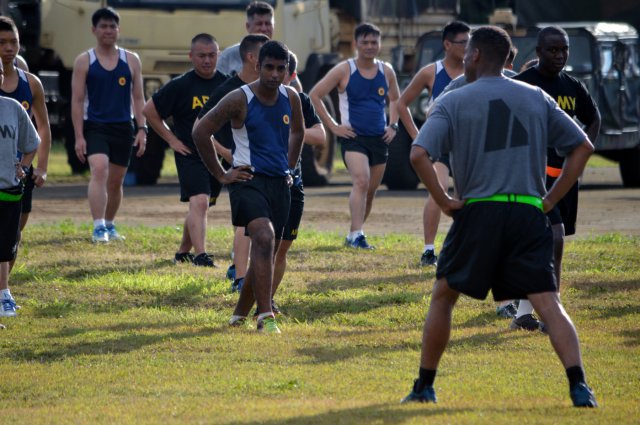 The changes come in the form of modifications to the existing exercise regime, as well as a redesign of its Standard Obstacle Course (SOC). All SOC grounds will be updated by June 2011.

The first prong of the new system – termed Vocation Related Exercises (VREs) – aims to strengthen specific muscle groups that in-service personnel will use to carry out combat tasks specific to their vocations.

Elaborating on the VRE, Assistant Chief of the General Staff (Training) Colonel Ng Wai Kit gave an example from the artillery vocation, where the soldiers need more upper body strength to carry 155mm shells. One of their VREs is the Dead Lift which involves lifting a weight from a standing position.

In the new training system, six old obstacles have been replaced with seven redesigned ones within the existing obstacle course.

Colonel Ng explained “the new obstacles have been designed to better emulate the operating environment and will better develop soldiers’ strength, agility and endurance for basic combat movement and tasks.”

For example, the third obstacle – named Rubble – trains soldiers to move through damaged urban spaces made up of collapsed concrete structures. To negotiate this obstacle, soldiers are expected to vault and duck in quick succession, mimicking the action of moving through urban rubble.

Familiar obstacles such as the Low Wall and Jacob’s Ladder (now renamed Apex Ladder) also feature in the redesigned SOC. These train basic confidence in executing combat manoeuvres and have been retained because of their relevance to the evolving operational demands.

Commenting on the changes was sports physician, Dr Roger Tian from Changi General Hospital who explained “the redesigned obstacles are safer for soldiers while being more relevant to combat fitness training. They adhere to sports science principles of progressive training and specificity.”

For example, the VREs are designed to target muscle groups relevant to each vocation’s combat tasks – which Dr Tian termed, ‘specificity’.

Progressive training will begin with recruits familiarising themselves with the obstacles and learning how to overcome them during Basic Military Training.

Tying it all back to the new combat fitness system that emphasises vocation-specific combat fitness, the Vocational Obstacle Course (VOC), which places greater emphasis on team-based fitness and leadership by junior commanders, was also unveiled. In the VOC, soldiers have to clear the redesigned combat obstacles as a section or a detachment and perform vocation-specific combat tasks along the way.

Sergeant Lim explained “the VOC is more suited to operating within urban environments and more relevant to our combat tasks. The timings are definitely achievable because of the progressive manner in which we are trained,” said the section leader who has led his section to well below the pass timing of 18 minutes required of his vocation as an Infantry soldier.

Pass timings are determined by the individual vocations’ requirements, taking into consideration combat load, required actions by the team members and total distance covered. For example, while both Infantry and Artillery soldiers have to run a distance of 300 metres after clearing the obstacles, the former simulates evacuating an injured team member on a stretcher. These requirements – determined by a soldier’s vocation – account for the differences in pass timings.

Colonel Ng added.“these differences reflect the SAF’s efforts to ensure that our combat fitness training programs are customised to the vocations."