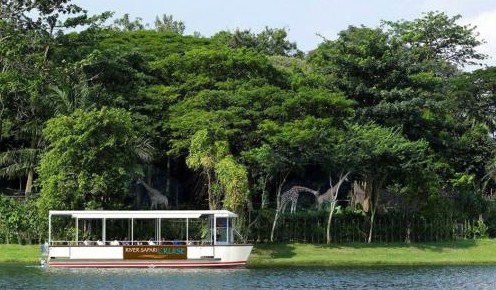 Visitors to the Singapore River Safari can go on a relaxing nature cruise along the Upper Seletar Reservoir with the launch of the River Safari Cruise attraction.

Built in 1920, this man-made lake holds up to 5,000 million gallons of water and not only provides drinking water, it is home to many native species such as the long-tailed macaque and water monitor lizards that thrive around and in the reservoir.

The cruise - which joins the Amazon River Quest in the River Safari lineup of boat rides - will travel along the outskirts of Singapore Zoo and the Night Safari compound, which border on the reservoir, giving visitors a chance to spot animals including giraffes and Asian elephants.

Tat stated "the first park ride is a theme park-style ride, which is a little bit exciting as there are little plunges along the way.

“Over (at the River Safari Cruise), it's an entirely different experience. It's very tranquil, peaceful and visitors basically enjoy cruising along the reservoir."

The River Safari Cruise replaces the boat ride that was previously in operation at Singapore Zoo, and embarks on a new route that meanders along the outskirts of Singapore Zoo and Night Safari, giving visitors a chance to spot wildlife nestled on the edges of these parks such as giraffes and rhinos.

Lucky visitors may catch a glimpse of elephants going on daily walks along the water's edge. Bird watchers can keep their eyes peeled for an array of feathered creatures, from storks to herons, which may make a stopover by the banks or roost on the trees.

Each cruise can accommodate up to 50 passengers and is wheelchair-accessible. Limited seats are available and boarding is on a first come, first served basis.

Since its opening in April 2013, the River Safari has attracted about 1.4 million visitors.