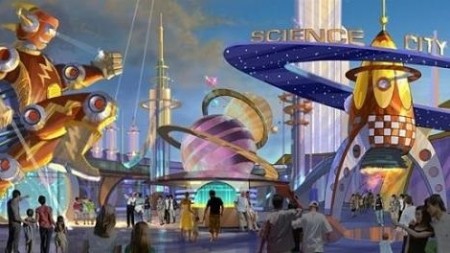 After a year of construction, Shanghai's future Disneyland theme park has started to take shape with the site having been leveled, river channels created and roads built.

Construction crews have almost finished grading the previuously undulating site to prepare it for the large-scale construction that will make the next stage in the development of the attraction.

To reduce subsidence and create a safe amusement park, the builders have adopted a so-called vacuum-preloading method on the 1.68 kilometre2 plot.

They divided the area into 44 parts and inserted pipes into the land to draw ground water. The builder compared the work to "doing embroidery" on the land and said it meets the standard of an airport runway. The land will not sink by more than 1 centimetrer for at least 50 years, according to the builders.

The theme park liesin the heart of the 20 kilometre2 Shanghai International Tourism and Resorts Zone.

The first Disneyland theme park on the Chinese mainland broke ground last April, and its first phase is due to open for business in 2015. The park is Disney's third in Asia, after Tokyo and Hong Kong.

The theme park's development has been backed by a 12.9 billion yuan (US$2.04 billion) syndicated loan with a number of Chinese banks for its first phase of construction.

A syndicated loan is provided by a group of lenders and is structured and arranged by one or several banks known as arrangers.

Such loans have been increasingly used to fund the construction of major infrastructure projects.