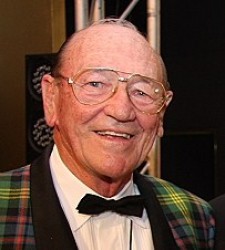 Keith Williams, the man behind the Gold Coast's Sea World theme park and the developer of Hamilton and Daydream Islands, has died at the age of 82.

The legendary entrepreneur first built the Gold Coast theme park, which opened in 1971, before going on to develop Hamilton and Daydream Islands in the Whitsundays and, more recently, financing the Port Hinchinbrook Resort and Marina in north Queensland.

The onetime postman is credited with bringing Australian tourism into the modern age with his development of the Sea World and Hamilton Island resorts, and was a famed members of the Gold Coast's 'white shoe brigade' - a group of high profile developers who backed then-Queensland Premier Joh Bjelke-Petersen in the 1970s and 1980s.

Williams' son Ben paid tribute to his father, who died this morning, telling The Australian newspaper that he was a "remarkable entrepreneur and family man" who had created thousands of jobs and entertained millions of people.

Ben Willians added that "his contribution to Australian tourism is probably without peer.

"Obviously his legacy is Sea World, Hamilton island more recently Port Hinchinbrook, which brought huge benefits to tourism in this country, but it was providing entertainment to people that gave him his greatest satisfaction."

Williams' love for water-skiing and its growing popularity in Australia in the 1950s led him to start up the Surfers Paradise Ski Gardens on the Nerang River.

He became Australian water ski champion in 1959 and in 1965 staged the world championships on the Gold Coast.

In 1971, after borrowing everything he could, he opened Sea World.

Ben Williams added "he started from nothing and throughout his career risked everything on his new ventures."

Hamilton Island management has released a statement reading that the "team was deeply saddened to learn of Keith Williams' death."

"We are just thankful that Keith and his wife Thea were able to visit us recently and spend some final days on the Island he loved. It was the first time in more than a decade that he had the opportunity to visit the resort."

"Queensland and Australia are indebted to Keith Williams for his many achievements. He was a true pioneer and legend and the tourism industry has lost one of its most passionate supporters with his passing. On Hamilton Island we are proud to continue the vision that Keith began so many years ago."

Williams owned and operated Hamilton Island between 1975 and 1996.

In January, Willians was honoured with a Gold Coast legend award for his contribution to Australian tourism through the development of the Surfers Paradise Raceway, Sea World, and other key Queensland facilities.