Rugby League Juniors to be graded by size 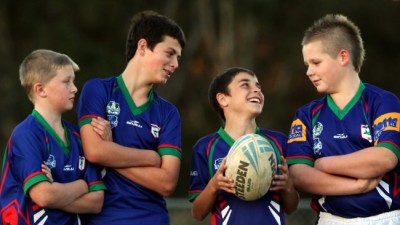 With concern that small players are being driven from rugby league by the heavy frames of early developers and children with Polynesian backgrounds; officials, parents and coaches are grappling with the issue of whether children of different builds should all play together.

According to a report by Steve Gee in Sydney's The Daily Telegraph newspaper, the Australian Rugby League (ARL) is considering the reintroduction of grading junior league players players by weight as they were up until the early 1970s.

The issue of Sydney's rising Polynesian community and simply larger children is seen as being a "silent threat" to rugby league junior player numbers, with many parents pulling children from the code because of the toll of collisions with children who can weigh up to 50kg more.

It is an issue junior leagues have been grappling with for almost a decade but admit has been too hard to solve because of a myriad of issues.

Until the early 1970s junior players were graded by weight, but the system also had problems because many bigger players were not mature enough mentally to handle jumps of more than two years in age.

Dr Robbie Parker, head of Westmead Children's Hospital's Institute of Sport, has been working with the ARL for over 18 months on possible solutions. He believes trialling mid-week weight competitions is a start.

However, he wants the split extended to create two weight divisions at all ages.

The Daily Telegraph recently attended a junior training session with the under-13s Campbelltown Collegians, where the weight gulf between the biggest and largest players was at least 20kg.

While parents and young players say a current grading system throughout NSW (where juniors are often chosen in teams on skill and experience) protects slight and smaller players, many believe there is a need for weight divisions - at least for children under 13.

The admission follows revelations AFL powerbrokers view the issue as a crack in grassroots rugby league, which the code intends to exploit in its recruitment drive.

Dozens of junior AFL players canvassed by The Daily Telegraph have also revealed the motive behind the code switch was "that it was better for small players".

Robbier Parker says the ARL should be applauded for addressing a sensitive issue, The Daily Telegraph reporting Parker saying "I am pleased the junior rugby league is working with us to try to come up with a formula.

"They are cognisant of the fact kids can get injured and the severity increases with the nature of the weight and they have deliberately tried to work with us to try to find solutions."