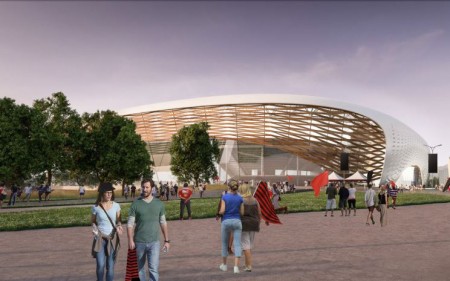 A series of options for Christchurch’s planned new stadium - including proposal for a roofed arena with a retractable playing field - have been presented by the Christchurch Stadium Trust.

Four options, with a price range of between $368 million and $584 million, have been presented, with the Trust favouring a 25,000 capacity ‘multi-use arena’ with a fixed roof and a retractable playing field at a cost of $496 million.

The retractable surface would be mounted on a tray that would allow the turf to be moved outside to grow, exposing a concrete floor that could be used for events, concerts, and non-turf sports.

The Trust explored options for a partially-open roof or a see-though roof like on Forsyth Barr Stadium in Dunedin, but recommended a solid steel roof.

This option would be $31 million more expensive than the Forsyth-Barr-style setup, but would allow lighting and sound systems to hang from the roof, and protect the turf from damage during concerts.

The pre-feasibility report said rugby organisations would have liked a larger stadium for the six hectare site in the Christchurch CBD, but other potential users considered 25,000 seats plus 5000 temporary seats was adequate.

Using the central field, the arena could hold 40,000 people for concerts.

The Trust advised that the new venue would take five years to design and build, and had the best financial returns with estimated earnings of $1.8 million over the first three years. 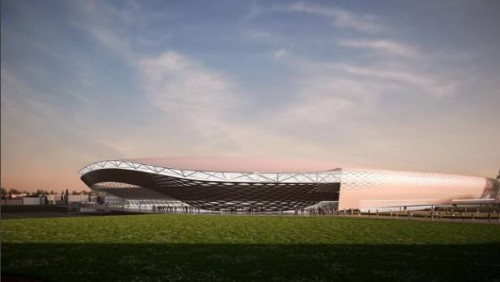 The study looked at who might make up the $243 million shortfall after the Christchurch City Council paid its promised $253 million as the projected earnings would not be enough to repay debt. Accommodation, hospitality, and offices were all deemed unfeasible ways of bringing private investors into the operation.

The study said ways to cover the shortfall included borrowing, introducing a regional rate through Environment Canterbury, and pre-selling commercial rights. It also suggested that there could be room within the precinct in future for commercial opportunities, it said.

A stadium built to the council's budget would likely have only 17,500 seats and no roof over the field which the report said “would fail badly any test of multi-use and simply not compete for All Black tests, major sporting fixtures and concerts."

The study said a roof was essential to attract big games and events, advising “he sentiment and support for a roof was so strong that many commentators and consultees believe that if the (venue) is not covered, the city should not commit to the facility.

It added “without the roof, the (venue) simply couldn't be a competitive, attractive or successful venue. It would be a provincial stadium."

The study said a stadium built to the specifications in the 2013 central city blueprint plan, with 35,000 permanent seats, would cost about $600 million and was considered excessive by everyone except rugby organisations.

The current proposal was for an "arena within which rugby is occasionally played", rather than a sports stadium. 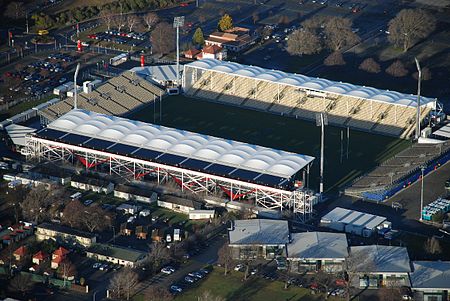 The study also said the venue's superior roof structure and solid floor would provide competitive advantages when bidding for events.

Promoters consulted for the study said Christchurch had ‘natural advantages’ over other South Island areas, such as Dunedin, including a larger population, a large international airport, hotels close to the arena, and other entertainment precincts.

Production of the study was overseen by a subcommittee of the Christchurch Stadium Trust, which owns the city's temporary stadium at Addington on behalf of the public. It is now being considered by both the Crown and the council. A joint business case will be required before funding is committed for an arena project.

Christchurch Mayor Lianne Dalziel said the study gave some clarity around the direction that the city should follow in developing its main venue, stating “the Council has set aside $253 million in its Long Term Plan to cover its half share of the cost of a new multi-use arena but it is clear other funding partners will need to be found.”

Mayor Dalziel added “all the shortlisted options require further investigation but it is clear from the pre-feasibility report the city would get the most versatility and the best financial return out of having a covered arena with a retractable turf.

“We have agreed with the Crown that we’ll set up a joint project team to examine the options in more depth and to prepare a business case so there is a lot more work to be done yet.”

Images: Artist's impression of a new Christchurch stadium (top and middle) and, built in just 100 days, the city's temporary AMI Stadium's five year life span was originally scheduled to end operations in 2017 (below).