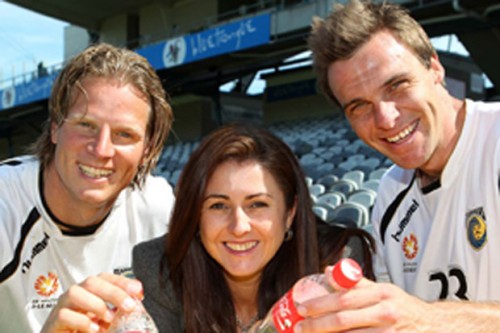 The Packaging Stewardship Forum (PSF) of the Australian Food and Grocery Council is backing new recycling initiatives at stadia in Gosford and Mackay.

The launch will encourage patrons at the match, and at all future matches, to 'Do The right Thing, Use The Right Bin'.

Funded by the PSF in partnership with Bluetongue Central Coast Stadium and Coca-Cola Amatil, 132 waste and recycling bins have been installed around the Stadium. The initiative will provide away from home recycling opportunities for 250,000 people at over 27 events each year and recycle up to 27 tonnes of aluminium cans, PET and glass bottles from landfill.

Bluetongue Stadium Managing Director Monique Marks explains "we are proud to be a part of the PSF's away from home program and to encourage recycling at the stadium. Taking part and leading the way in recycling for other businesses will assist with decreasing waste through our recycling efforts."

In Queensland, the initiative has seen 90 new waste and recycling bins installed at the recently opened Virgin Australia Stadium Mackay, each carrying the 'Do The Right Thing, Use The Right Bin' branding.

The new recycling systems will provide away from home recycling opportunities for up to 150,000 visitors to the stadium annually and divert up to 12 tonnes of aluminium cans, PET and glass bottles from landfill each year.

PSF General Manager Jenny Pickles explains "through well-placed bin infrastructure and promotion of the Do the Right Thing, Use the Right Bin message, the new systems will make it just as easy to recycle away from home as it is at home."

21st March 2011 - BRISBANE RACING CLUB NOT HORSING AROUND WITH RECYCLING