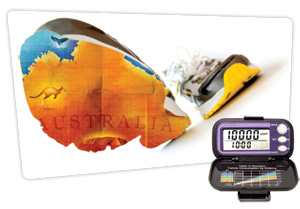 The Queensland Government is to fund a state-wide 10,000 Steps program to encourage Queenslanders to make positive changes to their lifestyle in order to maintain their health.

Outlining the funding, which had been an election pledge, Queensland Premier Annastacia Palaszczuk stated “the 10,000 Steps program, which encourages individuals to take 10,000 steps a day, is one of the largest and most successful health promotion programs in Australia since it began in 2002.

“By funding this program it shows our commitment towards healthy active communities and workplaces.”

Queensland Health Minister Cameron Dick said more than 82,000 Queenslanders had participated in the 10,000 Step program and they had logged over 40 billion steps during the lifetime of the program.

Minister Dick stated “this innovative program began in Queensland and has been hugely successful and copied all over the world.

“These research studies have contributed to the 10,000 Steps program becoming a world-renowned program.

“The 10,000 Steps program has been the Queensland Government’s main workplace physical activity promotion program, and as such nearly 3,500 Queensland workplaces have registered with the program.”

Many local councils across Queensland have adopted the 10,000 Steps program to encourage their communities to become more physically active by placing 10,000 Steps signage on their walkways.

Professor Bowman stated “this is a project that has come out of Rockhampton, and made a real difference in the lives of Australians across more than a decade.

“At the same time, 10,000 Steps tackles a serious local challenge, to engage people and get them moving in the fight against obesity and diabetes.

“With the long-time support of the State Government, this project has allowed CQUniversity to combine its strengths in research, community engagement and innovation, to make our world a healthier and happier place.”

CQUniversity Physical Activity Research Group Associate Professor Corneel Vandelanotte said he was very grateful for the continuing to fund the program, stating “the 10,000 Steps pedometer-based physical activity programs around the world have demonstrated their effectiveness to increase physical activity and improve health time and time again.

“When 10,000 Steps first started it was an innovative community-based, multi-strategy health promotion project.

“However, since the early days it has successfully morphed into a web-based health promotion strategy that is able to effectively reach large population at low cost.”

10,000 steps a day is often recommended as an appropriate level of activity for a healthy adult. It equates to about eight kilometres, or one hour and 40 minutes walking, depending on stride length and walking speed.

The 10,000 Steps program urges people to use a pedometer to log their steps, either individually or as part of a group, work or community program.

For more information go to www.10000stepsaustralia.com