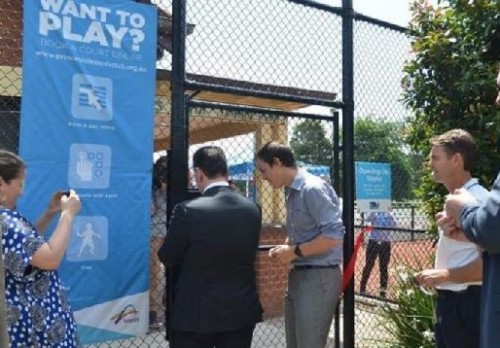 In a move designed to radically improve the way tennis players access courts, the ‘Opening Up Tennis’ program has been launched at the Princes Hill Tennis Club in the Melbourne suburb of Carlton North.

Opening Up Tennis allows tennis players to book court hire online, with the booking providing a pin code that, when entered into a keypad at the venue, allows access to the facility.

The access code also triggers lighting hardware when necessary making it easier for the community to play tennis where and when they want.

The initiative aims to aid grassroots tennis clubs serve up more action with players able to enjoy a hit without having to worry about arriving at the court during staffed hours while clubs get renewed opportunities to raise vital funds.

The Victorian Government has committed $250,000 towards the initiative with pilot schemes having seen the technology installed or scheduled to be installed at 15 Victorian tennis clubs.

During this pilot at some of the courts with the Opening Up Tennis technology usage has spiralled from 30 hours a month to 529 hours thanks to the new system.

Now, Tennis Victoria is rolling out the new technology at an additional 12 tennis venues.

“Opening Up Tennis means players can have a hit day and night, but not at the expense of our hard-working volunteers.”

“We’re committed to giving all Victorians more access to sport and recreation, and this great new initiative does just that.”

In addition to the Victorian Government funding, the program has been funded in partnership with Tennis Australia and Tennis Victoria, with plans for the program to be made available at affiliated tennis clubs across Australia.