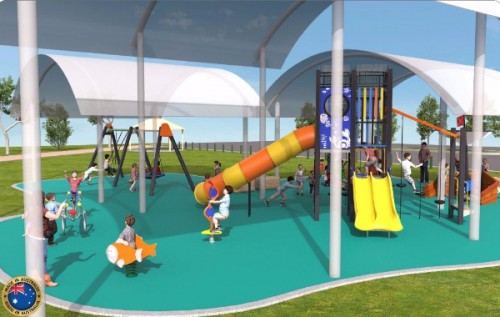 The Town of Port Hedland has announced that construction has commenced on a new playground at Marapikurrinya Park, replacing an earlier playground that was burnt down by vandals in October 2015.

Mayor Camilo Blanco said the $520,000 project was made possible thanks to funding support from Lotterywest, the Federal Government’s Stronger Communities program, donations from the community and the Town of Port Hedland.

Mayor Blanco commented “when the previous playground was burnt down, the Town was extremely disappointed in the lack of respect for a community amenity, however, we were overwhelmed by the support we received from residents and businesses who threw their support behind rebuilding the playground.

“The new playground will be an improvement on what was there previously – with the park overlooking our port and shipping activity, the playground will have a nautical theme with accessible equipment for people of all abilities which was one of our key priorities.

“There will also be a new permanent shade structure installed which will provide maximum protection for kids, improving the experience for them and their families all year round.”

Key highlights of the new playground include:

The first stage of the project will be the installation of the new shade structure, followed by the instalment of the modular play equipment which is expected to take approximately four to five weeks.

Mayor Blanco added “the Town is also looking at ways we can engage kids in the rebuild of the playground so they can be proud of what they have and ensure others respect this community area.

“Marapikurrinya Park is a central spot in our West End, and a popular public space for residents and visitors so having the new playground will really lift the entire amenity of the area.”

The new playground is expected to reopen in May.

Image: Concept design for the new playground at Marapikurrinya Park, which has been funded by Lotterywest, the Federal Government's Stronger Communities program, donations from the local community and the Town of Port Hedland.