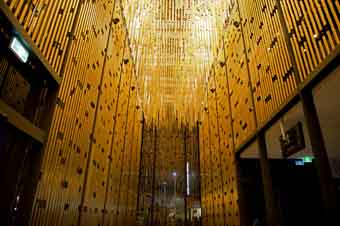 As Perth continues to grow, an influential lobby group has suggested that the Western Australian capital will need to double its provision of performing arts venues during the next 40 years to meet growing audience demand.

The 'Examining Perth's Performing Arts Infrastructure: Actions to position Perth as a global leader in the arts' survey from the Committee for Perth suggests that with growth in arts attendance likely to exceed 34% by 2021, existing cultural infrastructure "will come under enormous pressure".

The recently released survey highlights that Perth's population growth - it is Australia's fastest growing capital - will require "a doubling in the capacity of our performing arts infrastructure in just over 40 years, meaning that what Perth has slowly built over more than 100 years now has to be reproduced in just 40 (years)".

Intoducing the survey, Committee for Perth Chief Executive Marion Fulker says that on a seats-per-capita basis Perth compares favourably with national and international cities but that it suffers some big gaps in types of performance venues.

Fulker suggests that priority should be given to an indigenous cultural centre, a new lyric theatre suitable for large-scale opera, ballet and musical theatre and an additional concert hall or recital hall, stating "we found it was not a dismal story, but Perth is bucking the trend of other states by growing audiences faster than other cities, so we need to plan for future infrastructure gaps."

Fulker welcomed the recent openings of State Theatre Centre and multi-purpose Perth Arena, but added "those venues were a long time coming, and if we rest on our laurels we'll slip behind again."

Fulker says the report has produced surprising findings. Indigenous West Australians are among the most culturally active in the state, with more than two-thirds of indigenous people over 15 participating in at least one indigenous cultural event each year, according to the report.

Speaking to The Australian, Fulker continued that the survey "reinforces the need for Perth to have its own dedicated indigenous performing arts space, and for cultural tourism purposes."

The survey singles out Fringe World, the city's alternative arts festival, as achieving most success with ticket sales doubling between last year's and this year's festivals.

Fulker concluded "there's a growing appetite for arts and culture, and the Fringe is proof of that. When you try new things, the audience will come."

Following the survey, the Committee for Perth has called on the Western Australian Government to complete a long-term plan for arts and cultural infrastructure within 12 months, with initial funds committed in next year's budget.

The survey can be read at http://bit.ly/17loTtP

4th April 2012 - PERTH MAJOR STADIUM TO GET INCREASED CAPACITY AND A ROOF?