Drawn up by Parks Victoria and Regional Development Victoria the master plan aims to attract "high-yield" bushwalkers to the "iconic" five-day walk, with the luxury accommodation serviced by commercial operators.

Echoing the success of Tasmania’s Three Capes Track, the draft master plan reveals that four accommodation complexes, featuring cabins and luxury camping sites, are set to be built along the 56 kilometre trail, known for its natural beauty as well as its wildlife and cultural significance. Signalling an extraordinary change of direction for the Alpine National Park, the strategy predicts the area could be opened up to 65,500 "walker nights" a year by 2026, compared with just 17,000 currently.

The plan also proposes $4.6 million to create a series of three further “iconi" Victorian walks to include the Grampians Peaks Trail, the Great Ocean Walk and the Coastal Wilderness Walk (near Mallacoota) and proposes that guided walks, horseback riding and other tourist services would also be introduced.

On the Falls Creek to Hotham Alpine Crossing trail the new visitors would be at the expense of so-called self-sufficient bushwalkers, who the plan says are "spending little in the region", with the low-spending hikers to be banned from casual camping anywhere within 100 metres of the paid sites.

The most contentious section would be the provision of luxury huts in three sites, including seven perched near the top of the steep Diamantina Spur, towards the top of Victoria's largest free-standing mountain, Mount Feathertop. The cabins would most likely be serviced by helicopter.

The plan states “with implementation of the master plan, this latent demand can be tapped, although it can be expected that around 50% of the adventure-seeker market will be lost as these walkers seek more remote and physically challenging experiences.”

Victorian Regional Development Minister Jaala Pulford said the "visitor economy" in regional Victoria was already a $11.5 billion sector but there was "great potential" for growth.

She added “like any project, this will be assessed on merit.” 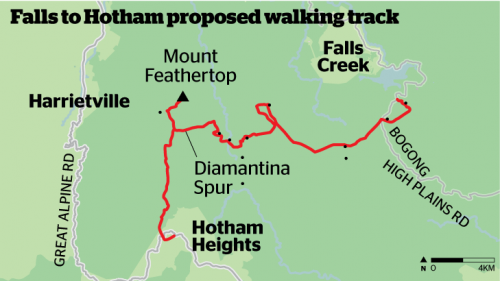 In the lead-up to the 2014 Victorian election, the current Government's policy platform promised to "prevent any development inside national parks that could compromise the integrity of the park".

That followed a controversial decision by the former Victorian Government to open the state's parks to commercial tourism development.

The new plan has sparked a warning from the Victorian National Parks Association (VNPA) that the government is attempting to commercialise Victorian parks by stealth by opening them up to private operators.

"At a time when park management is seriously underfunded, and many parks have serious weed and pest management problems, the promise that the revamped walk will exhibit 'exemplary environmental management' rings a little hollow."

Bushwalking Victoria's Peter Campbell said the development would ruin the landscape and experience, commenting “our national parks are there for everyone to enjoy. Rules and regulations that discourage recreational walkers are inappropriate.

"What's proposed up the Diamantina Spur is actually significant development. The placement of cabins up high would have a drastic negative impact on landscape values."

However, Parks Victoria spokesperson Stuart Hughes said the development would cater for everyone.

Hughes concluded “the Alpine National Park is a very special place, so we want to make sure how the facilities would be developed is done sensitively.

"Everyone else would still be able to use the track and be able to camp."

Comments on the Alpine Crossing Master Plan can be made up to Friday 27th January 2017.

Every operator, business and professional has a story to share - so if you’d like us to include your news in Australasian Leisure Management, or if you have any ideas of new industry topics that you’d like us to focus on, then please just contact us at leisure@ausleisure.com.au with details. We rely on industry contributions, and remember, our content is not paid for advertorial.