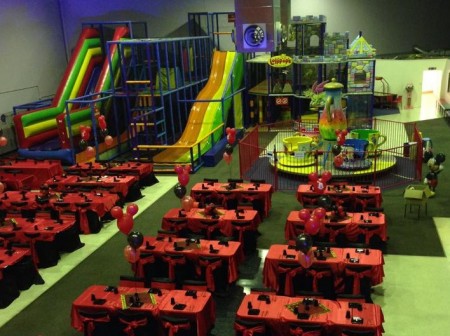 A child's birthday party at an indoor children's play centre in Western Sydney descended into a brawl on Saturday afternoon (20th June) following a disagreement on the play equipment.

Fairfax media reported that three fathers had to be taken to hospital with minor injuries when a fight broke out between parents from two separate birthday parties being held at Lollipop's Playland & Cafe in Wetherill Park.

The incident started when children from each birthday party had a disagreement over who could use the equipment at the indoor children's play centre.

A girl then left the play equipment to tell her father, aged 48, that a stranger had pulled her hair.

The father then confronted the man to discuss the incident but he was allegedly knocked to the ground and assaulted.

Two friends of the 48-year-old came to his aid but they were also allegedly assaulted, police said.

The father and his two friends, aged 27 and 32, were all taken to Fairfield Hospital with cuts and bruising to their faces, heads, backs and hands.

The rival group fled the scene in vehicles just after 4.30pm, police said.

The centre, has provided CCTV to police and declined to comment.